The National Weather Service (NWS) has admitted its forecasts were wrong, after predicting a “potentially historic blizzard” would strike.

The storm piled deep snow on Connecticut and Massachusetts, but New York City was largely spared.

NYC Mayor Bill de Blasio, defended claims he had overreacted to warnings, saying he had only acted on the information available.

Blizzard warnings remain along the coast from Long Island to Maine.

“Rapidly deepening winter storms are very challenging to predict,” the NWS wrote on its Facebook page.

“The storm has moved further east and will be departing faster than our forecasts of the past two days.

“The result is much less snow than previously predicted for the western half of our region,” it added.

On January 26 an emergency was declared in a swathe of north-eastern states, and meteorologists predicted up to 36in of snow. Officials later downgraded the numbers. 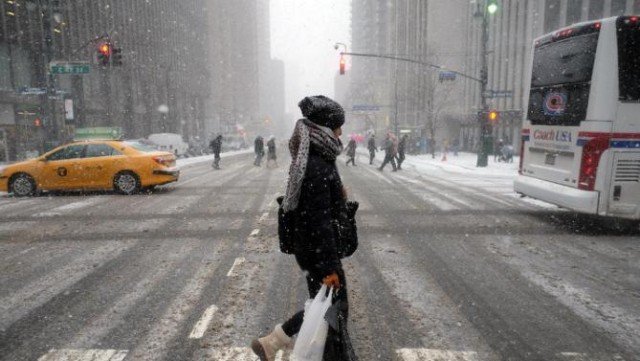 The New York City authorities imposed a driving ban – since lifted – and took the unprecedented step of shutting the subway.

On January 27, New Yorkers awoke to a blanket of snow less deep than feared, and since then city life has been getting back to normal.

“My job as the leader is to make decisions and I will always err on the side of safety and caution.”

Other areas of New York state saw much heavier snowfall, with a teenage boy killed in a sledging accident on Long lsland.

Worst affected elsewhere were Connecticut and Massachusetts, which saw 20.5in and 26.2in respectively, compared to the 5.5in seen in New York’s Central Park.

Thousands of people are without power, mostly in Massachusetts. The state’s only nuclear power station shut down after the blizzard interrupted its power flow.

Massachusetts governor Charlie Baker said the snow had been “fluffier and lighter” than anticipated, meaning there were less power outages.

The NWS is still warning of potentially life-threatening conditions along the New England coast, as the storm heads north into Canada.

Meteorologists expect the snow and strong winds to continue throughout Tuesday, before weakening overnight.

Air travel remains disrupted, with more than 5,000 flights cancelled, according to flightaware.com.

Schools across the region are expected to remain closed until January 28, with public transport expected to be back to normal in New York by then too.