Greek elections big winner, the far-left Syriza party, has formed an anti-austerity coalition with a right-wing party, the Independent Greeks.

Syriza leader Alexis Tsipras has taken the oath as the new prime minister.

“The European Commission stands ready to continue assisting Greece in achieving these goals,” Jean-Calude Juncker said in a tweet which also referred to “promoting sustainable jobs and growth”. 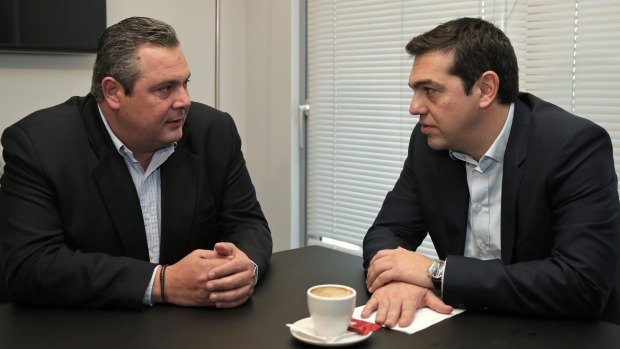 The euro recovered from an 11-year low against the US dollar as investors digested what Syriza’s victory means for the eurozone’s future.

With nearly all of the votes counted in Sunday’s poll, Syriza looks set to have 149 seats, just two short of an absolute majority. The Greek Independents are projected to have 13 seats in the 300-seat parliament.

Greece election result is expected to be one of the main issues at Monday’s meeting of 19 eurozone finance ministers.

Sunday’s result means that a majority of voters in Greece have essentially rejected a core policy for dealing with the eurozone crisis as devised by Brussels and Germany.

The troika of lenders that bailed out Greece – the European Union, European Central Bank, and International Monetary Fund – imposed big budgetary cuts and restructuring in return for the bailout money.

The man tipped to become the new Greek finance minister, Yanis Varoufakis, said the austerity regime had been “fiscal waterboarding policies that have turned Greece into a debt colony”.

Greece’s economy has shrunk drastically since the 2008 global financial crisis, and increasing unemployment has thrown many Greeks into poverty.

On January 25, Alexis Tsipras told jubilant supporters he wanted to write off half of Greece’s debt, but was ready to negotiate “a viable solution” and wants the country to stay in the eurozone.