McDonald’s is being sued in Virginia by ten former employees for racial discrimination.

The suit alleges that some employees were fired from one franchise because there were “too many black people”.

It is being backed by a group campaigning for better wages for fast-food workers and the local Virginia National Association for the Advancement of Colored People.

McDonald’s has not yet commented specifically on the suit.

The company issued a general statement, saying: “McDonald’s has a long-standing history of embracing the diversity of employees, independent franchisees, customers and suppliers, and discrimination is completely inconsistent with our values.

“McDonald’s and our independent owner-operators share a commitment to the well-being and fair treatment of all people who work in McDonald’s restaurants.”

The suit is part of a continuing effort on the part of labor organizers to hold McDonald’s responsible for the behavior of its franchisees. 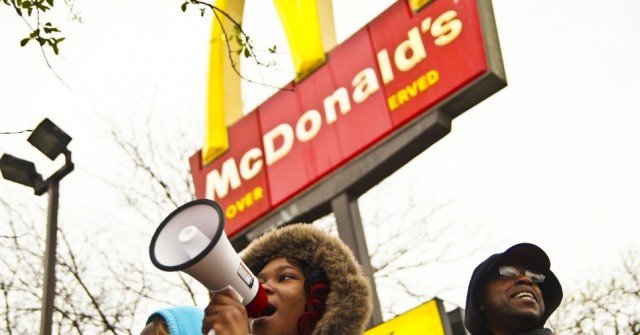 McDonald’s and other restaurant groups have argued that it should not be held responsible for the behavior and labor practices of franchisees.

However, their position has been weakened by the US National Labor Relations Board (NLRB).

It ruled that McDonalds “could be held jointly liable for labor and wage violations by its franchise operators” in July.

Since then, current and former employees have filed lawsuits against many McDonald’s franchises and the larger corporation alleging wage theft and other illegal practices.

In the lawsuit filed in Virginia on January 22, which is not part of the NLRB’s larger activity, 10 former employees – nine of whom are African-American and one of whom is Hispanic – allege that they were subject to “rampant racial and sexual harassment” by supervisors at three restaurants run by McDonald’s franchisee Michael Simon.

Michael Simon became franchise operator of the three restaurants in late 2013, when the majority of the employees at the restaurants were African-American.

Soon after, the suit alleges Michael Simon instituted a plan to hire more white employees, with supervisors allegedly telling employees that the restaurants were “too dark” and they needed to hire new employees to “get the ghetto out of the store”.

Subsequently, in mid-2014, a large number of white employees were hired and several of the African-American employees who are part of the suit were fired.

The fired workers alleged that when they attempted to contact McDonald’s corporate office, there was no response.

McDonald’s is due to report its Q4 2014 earnings before US markets open on January 23.