Windows 10 will bring Microsoft’s voice-controlled assistant Cortana to PCs, the company has revealed.

Microsoft also unveiled the HoloLens headset that it said would one day project the operating system over views of the real world.

In addition, Microsoft announced that Windows 10 would be offered free of charge for devices running Windows 8, Windows 7 and Windows Phone.

The offer, which is limited to the Windows 10’s first year of release, may aid its adoption.

It marks a change in strategy from Microsoft’s previous policy of charging for major updates, and could help avoid a repeat of the relatively slow uptake of Windows 8.

The wearable tech’s augmented reality see-through lenses represent a major leap forward over Google Glass and other existing eyewear – assuming the machine lives up to its on-stage demo, in which computer-generated elements appeared in the world surrounding the wearer.

Microsoft said that the final version of the machine would not need to be linked to other devices to work, and should be released within Windows 10’s “timeframe”.

It revealed NASA was already working with the kit, and said the US space agency hoped to start controlling its Mars rovers with a prototype version as soon as July.

Other demos involving the machine included the wearer:

Windows 10 brings the same operating system to devices of all sizes, rather than having different ones for PCs/tablets, mobile phones and the firm’s Xbox games console. 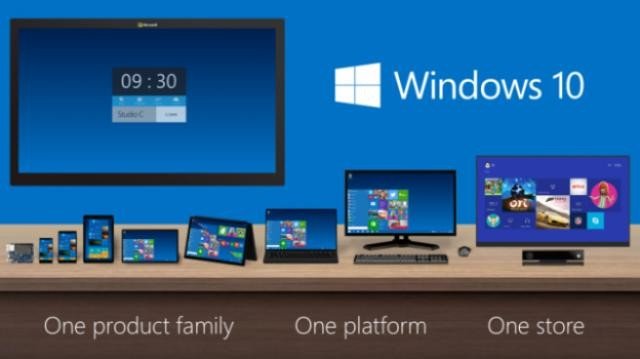 One of the key features that consumers will be able to use on PCs from “day one” is Cortana – the voice-controlled tool previously limited to Windows Phone handsets.

Microsoft executive Joe Belfiore demonstrated how the software could be told to:

In addition, Joe Belfiore showed how the software could be used to respond to requests that had been typed, rather than spoken into a PC.

Windows 8 had been criticized by some for placing so much focus on touch-centric commands rather than the mouse and keyboard.

JoeBelfiore also highlighted one of the core benefits of Windows 10: a single app will run on multiple types of device, with the user interface reformatting itself to suit the machine it is running on, rather than having a different program for phones, tablets and PCs.

He showed how this meant more advanced versions of the firm’s popular Office programs Excel, Powerpoint and Word could be brought to handsets running Windows 10 than were possible under Windows Phone 8. He also demonstrated a new “universal” Photos app that collates and sorts pictures taken with different devices.

This will have Cortana built-in to allow voice commands and provide extra personalized information – such as directions to a restaurant whose website is being looked at.

The software also includes a new “noting mode”, which will let users scribble or type over a page and then share it with others.

The new system also introduces the ability to stream Xbox One video games from the console to any other Windows 10 PC or tablet on the same Wi-Fi network.

This means that users will be able to play any game in their Xbox library on another device in another room of their home if the property’s main TV is being watched by someone else.

The facility is similar to the service Sony offers for its PlayStation 4 games machine that allows it to stream titles to Xperia phones and tablets and the PlayStation TV mini-console.

Offering Windows 10 free for the first year is a huge incentive to kickstart adoption.

Windows 10 is well positioned to capitalize on the resurgence of PCs.