Zambia is voting in a presidential election caused by the death of Michael Sata in 2014.

The vote is expected to be a close contest between Edgar Lungu from the governing Patriotic Front and Hakainde Hichilema from the United Party for National Development.

The winner will serve out the remaining 18 months of Michael Sata’s term.

Zambia is due to hold a general election in 2016.

The Patriotic Front held its final rally in a suburb of Lusaka on Monday as campaigning drew to a close.

Correspondents said the Patriotic Front has been presenting a united front following some bitter infighting over its candidate. 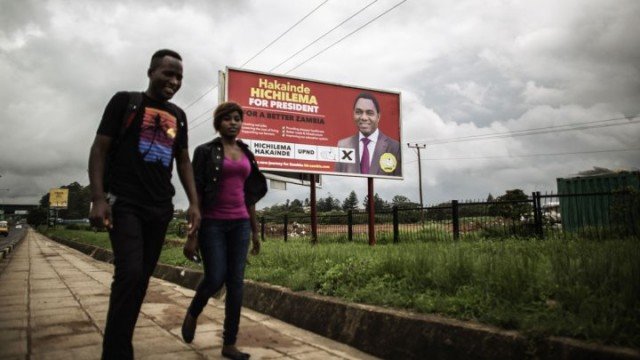 Interim President Guy Scott, who was a close ally of the former president, told supporters that “Michael Sata is still the spirit behind this party”.

Guy Scott – a white Zambian of Scottish descent – was barred from contesting the election himself because his parents were not born in Zambia.

Edgar Lungu has portrayed himself as a candidate for continuity and has said he wants to complete economic development projects initiated by Michael Sata.

His closest rival, the economist and opposition leader Hakainde Hichilema, says he has the experience necessary to revamp Zambia’s economy.

Correspondents say the election campaign has been largely peaceful.

However, electoral commission Chairwoman Irene Mambilima said she had “noted with dismay” some violent incidents.

In a nationwide address on Monday night, Guy Scott vowed to crack down on any post-election violence.

The electoral commission said that counting of the ballots should begin shortly after polls close with results due to be announced within 48 hours.

Michael Sata, who was Zambia’s fifth president, died in London last October at the age of 77.