Belgium is on high alert after Verviers anti-terror raid in which two suspected Islamist militants were killed.

The suspects were shot dead after they opened fire on police with automatic weapons on Janaury 15.

Officials say they had returned from Syria and planned imminent attacks on police targets. Another suspect was wounded before being arrested.

Searches were also carried out overnight in the Brussels area.

Speaking after yesterday’s raid in Verviers, near the German border, Prosecutor Eric Van Der Sypt said the terror threat level had been raised to three – the second highest.

Referring to the raid itself, he said: “The suspects immediately and for several minutes opened fire with military weaponry and handguns on the special units of the federal police before they were neutralized.”

After the operation, four Kalashnikovs, bomb-making equipment and police clothing were found, according to local media. Security forces remain in the Verviers area.

Police are expected to provide more details at a briefing on January 16.

“Operations on the ground are now over. We are now exploiting the information [from the overnight anti-terror operations],” Belgian Foreign Minister Didier Reynders told French TV station iTele. 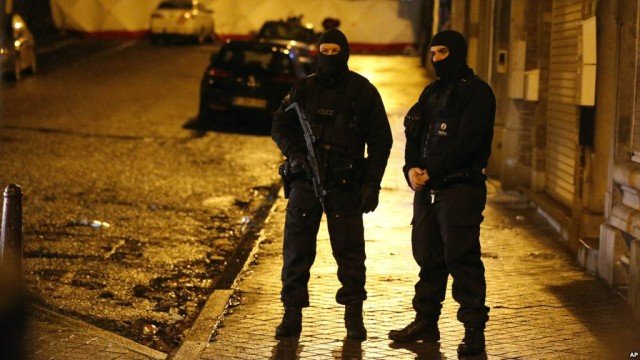 Some Jewish schools in Antwerp and Brussels were closed on January 16, after they were informed that they could be potential targets, Belgian newspaper Joods Actueel reported.

Anti-terror raids also took place late on Thursday in the capital Brussels and surrounding towns, including Sint-Jans-Molenbeek, Anderlecht and Schaerbeek.

Belgian officials say more than 300 people have left Belgium to fight with Islamic militant groups in Syria and Iraq.

Belgium is thought to have the highest number of foreign fighters per capita in Europe who have taken part in fighting in Syria.

Prosecutors said the suspects in Verviers were believed to have been plotting to attack a police station and cause a large number of casualties.

The area around the train station remains sealed off.

Belgian PM Charles Michel said the security operation “shows the government’s determination to fight those who want to spread terror”, his spokesman said.

Verviers is in the province of Liege, close to the German border, and has a population of about 56,000.

The incident comes a week after attacks in neighboring France that killed 17 people. Belgian media has reported that some of the weapons used in those attacks were bought in Brussels.