Twelve people have been arrested in the Paris region over last week’s attacks that killed 17, reports say.

They are being questioned about “possible logistical support”, such as weapons or vehicles, that they could have given the gunmen, a judicial source told AFP.

Last week’s violence began with an attack on the Charlie Hebdo magazine.

Twelve people were killed at the Charlie Hebdo offices by two gunmen, and four by another gunman at a kosher supermarket. The following day a policewoman was shot dead while responding to a traffic accident.

All three gunmen were later shot dead by police.

In the latest development, police carried out raids in the towns of Montrouge, Grigny, Chatenay-Malabry, Epinay-sur-Seine and Fleury-Merogis overnight, iTele reported.

On January 16, the Gare de l’Est train station in Paris was evacuated for an hour over a bomb threat. Services resumed at 09:00 AM local time, SNCF said, without giving further details. 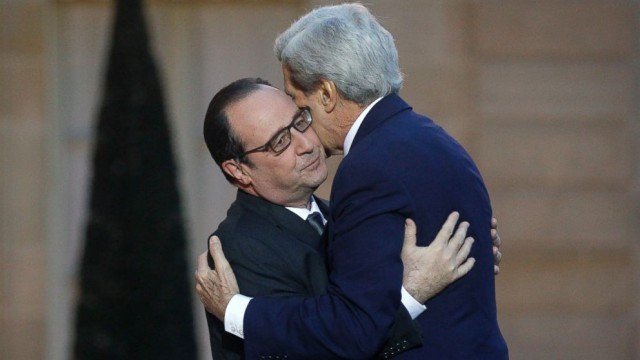 Spain has also launched an inquiry after it was revealed that one of the Paris gunmen, Amedy Coulibaly, had visited Madrid days before the attacks.

US Secretary of State John Kerry is in Paris to pay tribute to those killed in the attacks.

He hugged French President Francois Hollande, saying: “We share the pain and the horror of everything that you went through.”

Francois Hollande said: “You’ve been victims yourself of an exceptional terrorist attack on September 11 [2001]. You know what it means for a country.”

“We must find together appropriate responses,” Francois Hollande added.

US media had criticized the American government for not sending a high-profile representative to last Sunday’s unity march in Paris, which was attended by more than 40 world leaders. The US ambassador to France did attend the rally.

John Kerry said that he had been unable to attend because he was visiting Bulgaria and India at the time.

One of the men was suspected of leading an extremist group of Turkish and Russian nationals, police added.

The group was suspected of “preparing a serious act of violence against the state in Syria”, police said, but there was “no indication that the group was preparing attacks inside Germany”.