The fuselage of the crashed AirAsia plane has been located and photographed in the Java Sea, say officials.

Ng Eng Hen said the words painted on the side of the wreckage confirmed the plane was flight QZ8501.

AirAsia lost contact with the flight on December 28 as it was flying from Surabaya in Indonesia to Singapore with 162 people on board.

Dozens of bodies have been found but many of the passengers and crew are thought to still be inside the plane, which made finding the fuselage so important. 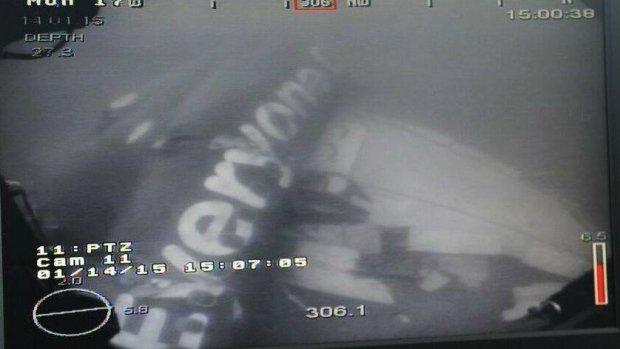 So far the plane’s two flight recorders and a tail section have been found and brought to shore. Investigators are analyzing the information in the “black box”, as the data recorders are known, to piece together the cause of the crash.

The pilot of the AirAsia flight had asked for a route change because of stormy weather before contact was lost, but it is not yet known for certain what brought down the plane.

“The MV Swift Rescue has located the fuselage of the AirAsia plane in the Java Sea,” Ng Eng Hen said on Facebook, adding that Singapore had informed the Indonesian search and rescue agency so that recovery operations could begin.

He said images taken by a remotely operated vehicle, which he posted as well, showed part of the wing and words on the fuselage that matched with those on the AirAsia flight.

The AirAsia slogan “Now everyone can fly” could be seen on the wreckage in the pictures.

The head of Indonesia’s search and rescue agency, Bambang Soelistyo, had said what they suspected was the fuselage had been spotted by search teams on Tuesday but that they were waiting for confirmation.

Bambang Soelistyo said it was not yet clear whether there were bodies inside, but that authorities hoped that was the case.

Earlier in the day when the wreckage was being investigated by divers, the official co-ordinating the search, SB Supriyadi, said raising the fuselage would be a tricky operation and authorities would have to determine the best course of action.

“If it is not too heavy, we may lift the whole piece and evacuate the victims,” said SB Supriyadi.

“If it’s too heavy, we may then swim into the fuselage and pull out the bodies one by one before lifting it.”

Since the plane disappeared a multi-national search has been under way involving aerial searches and more than 30 ships. However, strong currents, high waves and poor visibility have slowed down search and rescue efforts.