Former Ukraine’s President Viktor Yanukovych has been placed on Interpol’s wanted list, almost one year after he fled to neighboring Russia.

Viktor Yanukovych is accused by Ukrainian officials of embezzling millions of dollars in public funds.

He was ousted after clashes between police and protesters in Kiev left dozens dead, mainly demonstrators.

Afterwards, Russia moved to annexe Crimea from Ukraine and conflict broke out in parts of eastern Ukraine.

Russia has denied fomenting the violence in the eastern regions of Donetsk and Luhansk, where a frequently violated ceasefire is in place. Ukrainian military officials said on January 12 that there had been an increase in rebel attacks on their positions.

Germany’s foreign minister is due to meet colleagues from Russia, Ukraine and France in an attempt to reach an agreement on a potential summit of leaders in Kazakhstan this week. 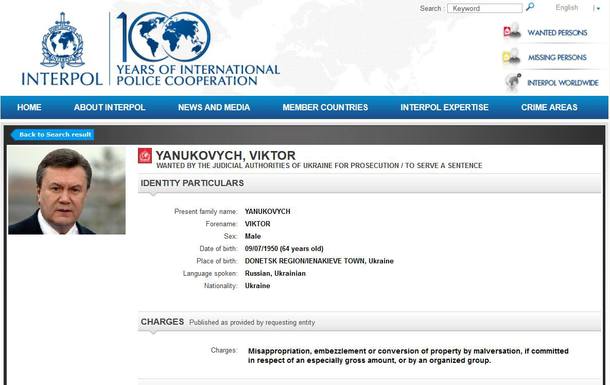 Germany has stressed that a summit will only take place if it leads to “concrete progress”.

A red notice for Viktor Yanukovych appeared on Interpol’s website on January 12. Under a red notice, Interpol’s role is described as assisting a national police force in “identifying and locating these persons with a view to their arrest and extradition or similar lawful action”.

Viktor Yanukovych, 64, was last seen in a photograph with film director Oliver Stone, which was said to have been taken in Moscow in December.

An unconfirmed report by Interfax news agency said Russia was likely to decline a request for Viktor Yanukovych’s extradition.

The decision to issue the notice was taken by a special Interpol commission, according to Ukrainian Interior Minister Arsen Avakov, after months of reasoning from the authorities in Kiev.

Arsen Avakov said a warrant had been issued for Viktor Yanukovych’s son Olexander, although that could not be confirmed on the Interpol website.

Ukraine’s new government accuses Viktor Yanukovych of ordering snipers to fire on protesters, although he rejects the accusations against him.