The video purports to show Hayat Boumeddiene passing through passport control with another man on January 2. She is thought to now be in Syria.

French police are seeking her after Amedy Coulibaly and two other gunmen launched deadly attacks on Paris last week.

About 10,000 troops have been deployed in France following the attacks.

Hayat Boumeddiene has been identified as a suspect by French police, although she left France before the attacks.

The Turkish foreign minister said she arrived in Turkey on January 2 from Madrid, before continuing to Syria six days later.

The security footage, published by Haberturk newspaper, was released by Turkish police. It appeared to show Hayat Boumeddiene and a man at Sabiha Gokcen Airport in Istanbul. 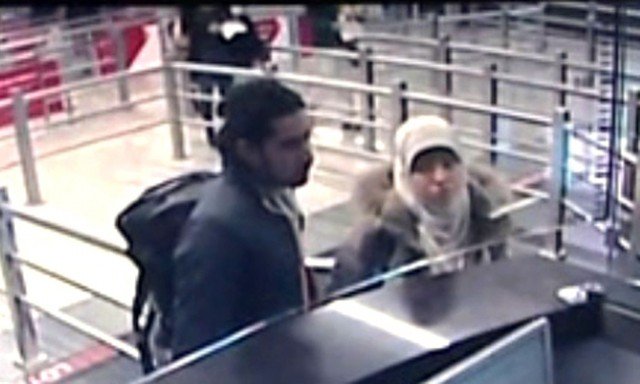 According to Turkish officials, the man was Mehdi Sabri Belhouchine, a man of North African origin, and that he was not on a watch list. Officials believe he crossed into Syria with Hayat Boumeddiene.

Hayat Boumeddiene’s boyfriend, Amedy Coulibaly, had killed four people at kosher supermarket HyperCacher in eastern Paris on January 9 before police stormed the building. He is also believed to have shot dead a policewoman the day before.

Amedy Coulibaly had claimed that he co-ordinated his attack with brothers Said and Cherif Kouachi, who attacked the offices of satirical magazine Charlie Hebdo on January 7, killing 12 people. All three gunmen were shot dead on January 9 after police ended two separate sieges.

French prosecutors said Hayat Boumeddiene had exchanged more than 500 phone calls with the wife of Cherif Kouachi in 2014.

French police said they had also found a second flat in Paris which had been used as a hide-out by Amedy Coulibaly, and contained weapons.

Turkish PM Ahmet Davutoglu said on January 12 that Turkey had not been asked to deny Hayat Boumeddiene access.

“We need to receive intelligence first so we can track people. We have 7,000 people on a no-entry list and deported 2,000, including French and German citizens.”

He added: “Is it Turkey’s fault that it has borders with Syria?”