They believe they have also located the cockpit voice recorder, the second part of the so-called black box, but divers have not yet managed to reach it.

AirAsia flight QZ8501 disappeared in bad weather on December 28 with 162 people on board.

The aircraft, which was flying from Surabaya in Indonesia to Singapore, is thought to be deep in the Java Sea.

Dozens of bodies have been recovered but most of the victims are believed to still be inside the fuselage, which has not been found.

Speaking in Jakarta, the head of Indonesia’s search and rescue agency Bambang Soelistyo told reporters: “I received information from the National Transport Safety Committee chief that at 07:11, we succeeded in bringing up part of the black box that we call the flight data recorder.”

He said the flight data recorder was found under the wreckage of a wing. 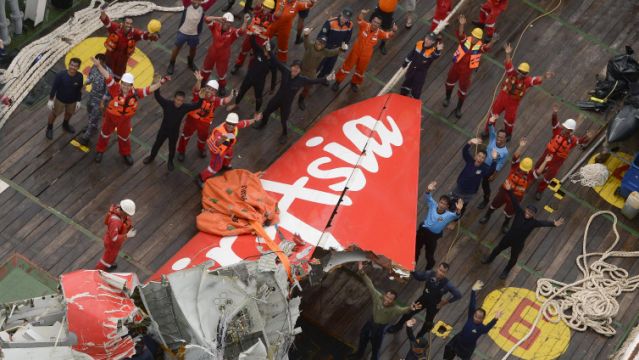 Hours later, other officials said the cockpit voice recorder had also been detected but divers had not yet managed to reach it.

The two recorders, usually housed inside the rear part of the plane, are designed to survive a crash and being submerged in water. They contain underwater locator beacons which emit so-called “pings” for at least 30 days.

Suyadi Bambang Supriyadi, operations co-ordinator for Indonesia’s search and rescue agency, said that based on initial analysis of the wreckage, the plane could have “exploded” upon landing on the water.

“The cabin was pressurized and before the pressure of the cabin could be adjusted, it went down – boom. That explosion was heard in the area,” he was quoted as saying by AFP news agency.

Over the weekend, three ships detected pings that were thought to be from the black box’s emergency locator transmitter. However, strong currents and high waves prevented the search operations.

The tail section of the Airbus A320-200 was brought to the surface, but the flight recorder was not inside it, as had been hoped.

On January 12, weather allowed for divers to retrieve the flight data recorder.

The international search for the fuselage and the remaining missing passengers and crew is continuing in the Java Sea.

Bambang Soelistyo said all ships now “will be deployed with the main task of searching for bodies that are still or suspected to still be trapped underwater”.