Legendary actress Anita Ekberg has died at the age of 83.

The star of La Dolce Vita and a former Miss Sweden, Anita Ekberg was branded a “s** goddess” for her performance in Federico Fellini’s 1960 movie.

The moment where Anita Ekberg wades through Rome’s Trevi Fountain in a strapless dress is considered one of cinema’s most iconic scenes.

Anita Ekberg died in Rome on Sunday morning, her lawyer confirmed. She had been in hospital since Christmas following a series of illnesses.

The actress had been in a wheelchair for several years after being knocked down by one of her pet Great Danes, breaking a hip.

Born in Malmo, Sweden, in 1931, Anita Ekberg was the sixth of eight children.

She said her father, a harbor master and a strict Protestant, was “the apple of my eye”, although she later fell out with all but one of her siblings.

After winning the Miss Sweden title at the age of 20, Anita Ekberg travelled to America where she took part in the Miss Universe contest.

Although she didn’t win and spoke very little English, she was immediately signed to a contract by Universal Pictures.

The studio sent her to work in Italy, where she played Henry Fonda’s unfaithful wife in King Vidor’s War and Peace (1956).

It was in Rome that Anita Ekberg met director Federico Fellini, who cast her in La Dolce Vita as Sylvia Rank – “the most wonderful woman created since the beginning of time” – an actress pursued by news photographers. 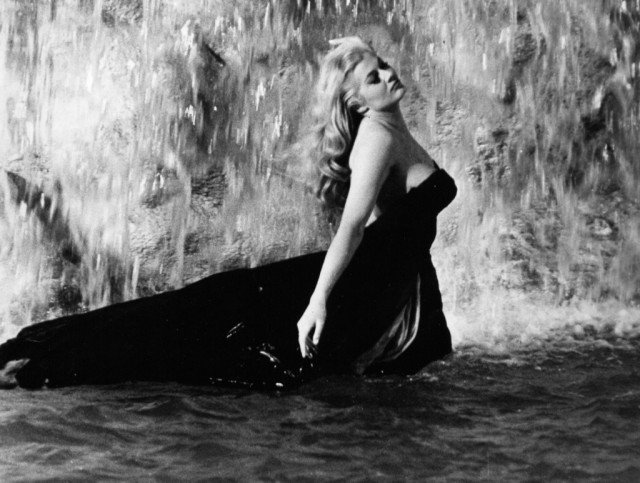 The famous scene in the Trevi Fountain saw Anita Ekberg and her co-star Marcello Mastroianni wading through the chilled waters in sensual abandon.

The sight of the water caressing her impossibly voluptuous body was shocking for audiences in the 1950s.

The Vatican condemned it, but the famously sharp-tongued actress was unrepentant.

“I’m very proud of my breasts, as every woman should be,” Anita Ekberg once said.

The fountain scene was shot on a chilly March morning in central Rome.

“I was freezing,” said Anita Ekberg.

“They had to lift me out of the water because I couldn’t feel my legs anymore.”

Her co-star, Marcello Mastroianni, found the scene even more difficult, despite the luxury of a wetsuit under his clothes. He needed his acting resolve stiffened by an entire bottle of vodka, Federico Fellini claimed. More than once, he fell over drunk in the freezing water.

“I have seen that scene a few times. Maybe too many times,” Anita Ekberg told Swedish radio in 2005.

“I can’t stand watching it anymore, but it was beautiful at the time.”

Considering that La Dolce Vita gave rise to the term paparazzo, it was ironic that the movie resulted in Anita Ekberg being hounded by the press herself.

She was constantly in the headlines for her romances with Hollywood’s leading men, and her lovers were said to include Errol Flynn, Yul Brynner and Frank Sinatra.

Anita Ekberg also made the front pages when, in 1960, she turned on photographer Felice Quinto with a bow and arrow.

Feice Quinto was amongst a pack of reporters who followed her from a nightclub to her villa in Rome. During the fracas, she was photographed with her knee in one man’s groin.

The police were called in to control the crowds who were trying to get a glimpse of the couple, but the marriage was doomed by Anthony Steel’s heavy drinking.

Federico Fellini cast Anita Ekberg again in his section of the portmanteau comedy Boccaccio ’70 (1962), where she played a 20ft version of herself with plunging cleavage, stepping down from an advertising hoarding to stalk a prudish doctor.

By the late 1970s, Anita Ekberg had virtually disappeared from the screen, making only rare appearances in forgettable European films, although she appeared as herself in Federico Fellini’s 1987 cinematic memorybook Intervista.

According to several reports, Anita Ekberg was almost penniless at the time of her death. She had been robbed of jewellery and furniture and her villa was badly damaged in a fire, forcing her to move, temporarily, into a care home.