The House of Representatives has passed the controversial bill approving the construction of the Keystone XL pipeline.

The Senate is expected to pass a similar bill soon, which President Barack Obama has said he will veto.

Earlier in today, a court in Nebraska dismissed a case that would have stalled construction of Keystone XL pipeline.

The project has been one of the most contentious issues between President Barack Obama and Republicans who now lead Congress.

It is 1,179-mile extension of an existing pipeline that would bring additional oil from the tar sands of Alberta, Canada, to refining facilities near the Gulf of Mexico.

The bill was the first piece of major legislation to be introduced by the newly Republican-controlled Congress. It passed the House by a vote of 266-153, with 28 Democrats supporting the measure.

“We shouldn’t be debating it, we should be building it,” House Majority Leader Kevin McCarthy said.

The Senate will consider a similar bill on January 12, which it will likely pass in the coming weeks. 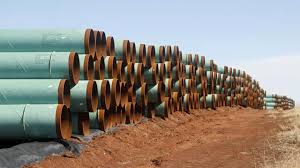 The bill is controversial because the tar sand oil that the pipeline will transport is said to be more polluting than other types of oil.

Many Republicans and some trade unions support the bill because they say it will generate jobs.

Because the pipeline would cross an international border, the state department has to grant a permit for its construction.

But in voting today, Congressional Republicans have set the stage to bypass this review process and allow construction to begin immediately.

Earlier in the week, the Obama administration said it opposes the bill because it “prevents the thorough consideration of complex issues that could bear on US national interests,” and because of “uncertainty due to ongoing litigation in Nebraska”.

On January 9, the Supreme Court in Nebraska dismissed the lawsuit on which Barack Obama’s veto threat was party based.

The lawsuit was considered a major obstacle to the pipeline’s construction.

Despite passing, the bill failed to garner the two-thirds majority in the House that it would need in the future to override a presidential veto.

The Senate would likely be unable to override a veto as well.