Heavily armed anti-terror teams are mobilized in eastern Paris after a gunman has seized hostages at a kosher supermarket.

Schools near the supermarket are under lockdown, AP news agency reports.

Separately police have ordered the closure of all shops in the Marais, a traditionally Jewish area in the heart of Paris’s central tourist district.

The hostage-taker in eastern Paris – said to have taken up to five people prisoner – knew at least one of the suspected Charlie Hebdo attackers, a source told AFP news agency.

The gunman is suspected to be behind the shooting of a policewoman in Montrouge on January 8.

French police have issued an appeal for witnesses to that shooting. They said they were looking for two people: a man called Amedy Coulibaly, 32, and a woman called Hayat Boumeddiene, 26. 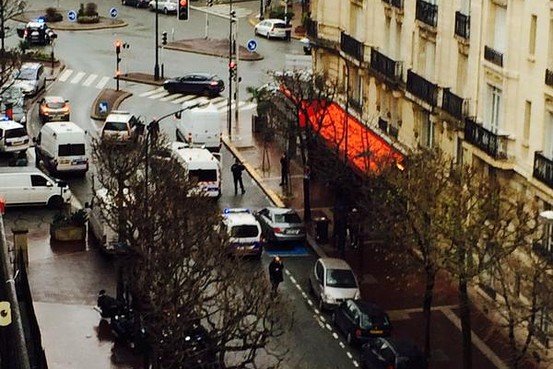 The two were thought to be “armed and dangerous”, French police said.

The Charlie Hebdo attackers, named as brothers Said and Cherif Kouachi, linked by intelligence officials to militant groups, shouted Islamist slogans during the shooting at the magazine office on January 7 and then fled Paris in a hijacked car, heading north.

Shots were fired during a high-speed car chase earlier on Friday.

It appears the suspects had hijacked another car in the town of Montagny-Sainte-Felicite before travelling on to Dammartin.

The car’s owner is said to have recognized them as brothers Cherif and Said Kouachi, the key suspects.

In a televised statement, Interior Minister Bernard Cazeneuve confirmed the men being sought on January 9 were those wanted for the Charlie Hebdo attack and said they would be “neutralized”.