An impeachment hearing against former PM Yingluck Shinawatra has begun in Thailand’s parliament on January 9.

Yingluck Shinawatra could be banned from politics for five years after her impeachement.

The former prime minister, Thailand’s first woman in this position, was removed from office for abuse of power in May 2014 and days later her government was ousted in a military coup that ended months of street protests against her by her rivals.

Yingluck Shinawatra remains popular among the rural poor who elected her in a 2011 landslide, as does her brother, ousted premier Thaksin Shinawatra, and the impeachment hearing could test a fragile calm under military rule.

In her opening statement to the military-appointed National Legislative Assembly, Yingluck Shinawatra said the proceedings were futile as she no longer held any political post.

“I was removed from my position as prime minister. I have no position left to be removed from,” Yingluck Shinawatra told the assembly.

About 20 of Yingluck Shinawatra’s supporters gathered outside parliament despite government warnings to stay away. Some held red roses and tried to raise pictures of the former prime minister until police told them to put them away.

Thailand is under martial law and public gatherings are banned. 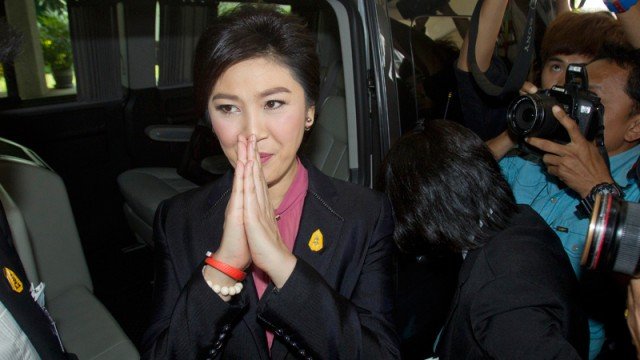 The case concerns Yingluck Shinawatra’s role in a rice subsidy program which critics denounced as a wasteful handout to her supporters and which incurred billions of dollars in losses.

A day after she was ordered to step down in May, the National Anti-Corruption Commission indicted her for dereliction of duty in relation to the rice scheme.

The impeachment is the latest chapter in a divisive 10-year struggle for power between the Shinawatras and the royalist-military establishment which Thaksin Shinawatra, a populist former telecommunications tycoon, as a threat.

A guilty verdict would see Yingluck Shinawatra banned from politics.

Her supporters say the case is aimed at barring her from an election the military has promised to hold early next year and ending the influence of the Shinawatra family.

Thaksin Shinawatra was ousted in a 2006 coup and lives in self-exile to avoid a 2008 graft conviction but remains hugely influential.

The National Legislative Assembly has said a decision could come by the end of the month.

Under the subsidy scheme, Yingluck Shinawatra’s government bought rice from farmers at prices much higher than on the open market leading to huge stockpiles.

Yingluck Shinawatra defended the scheme in her opening statement.

“Please look at the benefits of the scheme and not just the financial cost,” she said.