According to French officials, 12 people have been killed and seven others injured after gunmen attacked the Paris office of satirical magazine Charlie Hebdo.

At least two masked gunmen opened fire with assault rifles in the office and exchanged shots with police in the street outside before escaping by car.

President Francois Hollande said there was no doubt it had been a terrorist attack “of exceptional barbarity”.

A major police operation is under way in the Paris area to catch the killers.

The satirical weekly has courted controversy in the past with its irreverent take on news and current affairs. 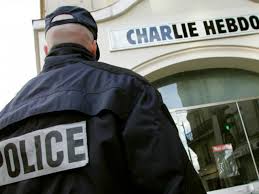 The magazine was fire-bombed in November 2011 a day after it carried a caricature of the Prophet Muhammad.

People had been “murdered in a cowardly manner”, Francois Hollande told reporters at the scene.

“We are threatened because we are a country of liberty,” he added, appealing for national unity.

Two of those killed are police officers, AFP reports, and several of the wounded are in a critical condition.

“A few minutes later we heard lots of shots.”

The men were then seen fleeing the building.

Police have warned French media to be on alert and pay attention to security following the attack.

France was already on the alert for Islamist attacks after several incidents just before Christmas.

Cars were driven at shoppers in two cities, Dijon and Nantes, and police were attacked by a man wielding a knife in Tours.

While the French government denied the attacks were linked, it announced plans to further raise security in public spaces, including the deployment of around 300 soldiers.