In a wide-raging interview with NPR shortly before leaving for Hawaii for his annual holiday, President Barack Obama has said Vladimir Putin made a “strategic mistake” when he annexed Crimea, in a move that was “not so smart”.

Those thinking the Russian president was a “genius” had been proven wrong by Russia’s economic crisis, Barack Obama said.

International sanctions had made Russia’s economy particularly vulnerable to changes in oil price, he said.

Barack Obma also refused to rule out opening a US embassy in Iran soon.

“I never say never but I think these things have to go in steps” he told NPR’s Steve Inskeep in the Oval Office.

Barack Obama criticized his political opponents who claimed he had been outdone by Vladimir Putin.

“You’ll recall that three or four months ago, everybody in Washington was convinced that President Putin was a genius and he had outmaneuvered all of us and he had bullied and strategized his way into expanding Russian power,” he said. 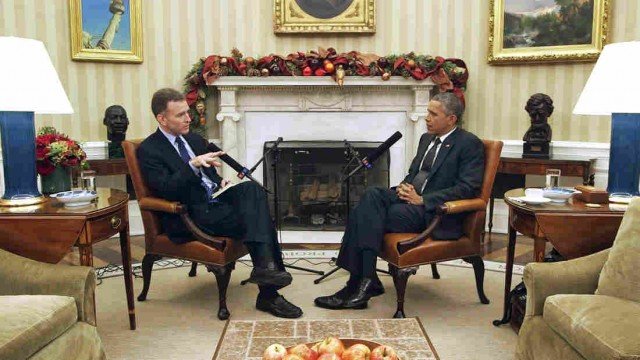 “Today, I’d sense that at least outside of Russia, maybe some people are thinking what Putin did wasn’t so smart.”

Barack Obama argued that sanctions had made the Russian economy vulnerable to “inevitable” disruptions in oil price which, when they came, led to “enormous difficulties”.

“The big advantage we have with Russia is we’ve got a dynamic, vital economy, and they don’t,” he said.

“They rely on oil. We rely on oil and iPads and movies and you name it.”

Following a disputed referendum in Crimea, Russia unilaterally annexed the peninsula from Ukraine in March. It did so weeks after a revolution ousted Ukraine’s pro-Russian President, Viktor Yanukovych.

The US, EU and other countries then implemented a series of economic sanctions against Russia.

The Russian currency has since lost half its value against the dollar and the economy has begun to contract.

Barack Obama also said that sending US troops to fight against the Islamic State group in Iraq and Syria would be counter-productive.

“If we do for others what they need to do for themselves – if we come in and send the Marines in to fight ISIL [ISIS], and the Iraqis have no skin in the game, then it’s not going to last,” the president said.