Seven police officers have been arrested in Hong Kong in connection with the beating of pro-democracy protester Ken Tsang.

A police statement said the policemen, who had already been suspended, were detained on suspicion of “assault resulting in grievous body harm”.

The incident took place on October 15 amid clashes while police cleared an underpass by the Admiralty camp.

Civic Party protester Ken Tsang was filmed being led away in handcuffs and beaten for several minutes.

Local TV network TVB later aired footage of his assault, and Ken Tsang’s lawyer said that the beatings had continued after he was taken to a police station. 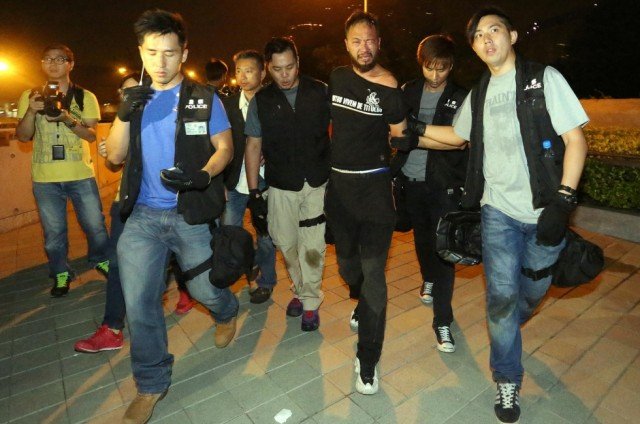 The authorities immediately moved to suspend the officers and launched an investigation shortly after the clip was aired.

On November 26, a police spokesman said they had not delayed investigations into the case, and that Ken Tsang had promised to show up to identify his assailants, but failed to do so.

The spokesman called on Ken Tsang to “assist the police in investigations as soon as possible”.

The police also rejected previous criticism of their handling of the case, saying that their investigations had consistently followed the procedures for complaints against police officers.

“If any other officer is suspected of illegal behavior, the police will investigate impartially and not show favoritism,” said the spokesman.

Police used pepper spray and batons on October 15 to remove protesters from Lung Wo Road, arresting 45 people who had resisted the action.

Since then the authorities have attempted to clear parts of the three protest sites in Hong Kong, after the high court granted injunctions to several groups.