Two window washers, who became trapped on scaffolding near the 68th floor of One World Trade Center, have been rescued by New York firefights after more than one hour.

Footage showed the workers rescued through a hole cut in one of the glass windows of One World Trade Center.

The two people were uninjured and tethered. 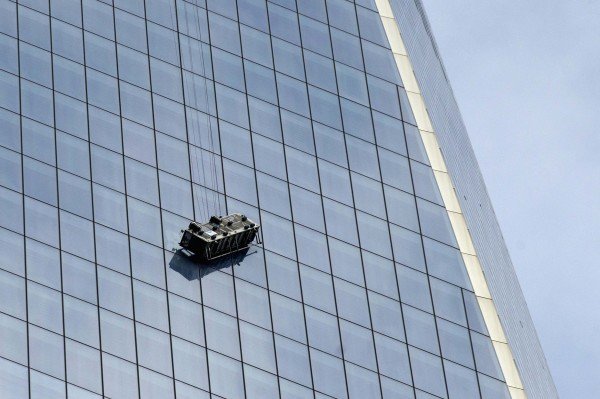 The call came in at 12:42 EST and the firefighters were on the scene in less than four minutes, a spokesman said.

The window cleaners were pulled inside at around 14:15 EST.

The rescued men were identified as Juan Lopez, who has been a window cleaner for five years, and Juan Lizama, who has been on the job for 14 years, Gerard McEneaney, a labor union official, told Reuters.

The 1,776ft tower opened for business last week as the first of 3,000 employees of publishing giant Conde Nast moved into their new offices there.

A police official said the partially collapsed cradle was hanging at “a 75-degree angle”.

The cable on the cradle apparently broke as it retracted towards the roof of the building.

People on the ground were moved back in case glass began flying from One World Trade, the country’s tallest skyscraper.

Gary Hansen, an architect who worked on One World Trade Center, happened to be across the street during the incident.

He told Reuters the building was designed with three cranes on top, two to suspend platforms and one for emergencies.