Jesus Murillo said three alleged gang members claimed the students were handed over to them by police.

They said some were already asphyxiated and they shot the others dead, before setting fire to all the bodies.

A total of 43 students went missing after clashing with police on September 26 in the town of Iguala.

The suspects from the Guerreros Unidos drug gang were recently arrested in connection with the disappearances.

Relatives of the missing said they had been told that six bags of unidentified human remains had been found along a river near where the students vanished.

Jesus Murillo warned that it would be difficult to identify the charred remains and that authorities would continue to consider the students as missing until DNA tests confirmed the identities.

Previous searches have uncovered mass graves in the area, but initial tests suggested they did not contain the remains of the students.

Jesus Murillo showed videotaped confessions by the suspects who said they had loaded the students into dumper trucks and taken them to a landfill site in Cocula, a city near Iguala.

About 15 of the students were already dead when they arrived and the rest were shot, according to the suspects.

Jesus Murillo said the bodies were then burned with petrol, tires, firewood and plastic in an inferno that lasted for 14 hours. 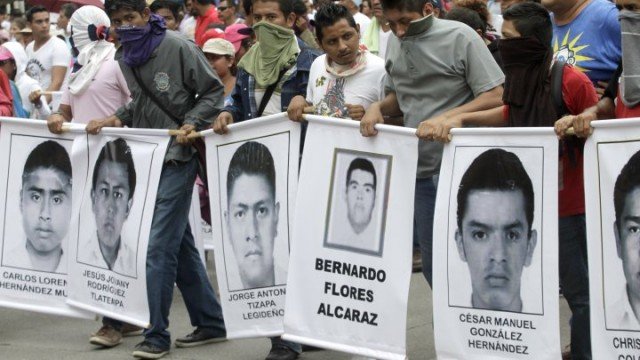 “The fire lasted from midnight to 2PM the next day. The criminals could not handle the bodies (for three hours) due to the heat,” he said.

He said that the suspects then crushed the remains, stuffed them into bags and tossed them in a river.

Jesus Murillo showed videos of investigators combing through small pieces of burned remains that were found in black plastic bags.

The suspects said they were not sure how many students they had taken but one said there were more than 40, Jesus Murillo added.

“The high level of degradation caused by the fire in the remains we found make it very difficult to extract the DNA that will allow an identification,” he added.

However, relatives of the missing remained skeptical. The families have been highly critical of the investigation into the students’ disappearance.

The case has shocked Mexico. Thousands have staged protests over what they say is collusion between officials and organized crime, along with government inaction.

President Enrique Pena Nieto has faced widespread criticism and on November 7 he vowed to hunt down all those responsible for the “horrible crime”.

The students from a teacher training college in Ayotzinapa, in Guerrero state, had travelled to nearby Iguala to protest against what they said were discriminatory hiring practices, and to collect funds for their college.

They went missing after clashes with the police.

Six people were also killed after police opened fire and witnesses described seeing the students being bundled into police cars.

More than 70 people have been arrested in connection with the disappearances, including the Mayor of Iguala, Jose Luis Abarca, and his wife, Maria de los Angeles Pineda, who were detained in Mexico City on November 4.

Mexican officials accused Jose Luis Abarca of ordering police to confront the students to prevent them from disrupting a public speech given by Maria de los Angeles Pineda.