President Barack Obama was joined by the House and Senate leaders in holding cross-party talks aimed at ending political gridlock in Washington.

The White House luncheon came after the Republicans won control of the Senate in Tuesday’s elections.

Barack Obama, a Democrat, and heads of both parties in the House of Representatives and Senate were to explore avenues of compromise after years of rancor.

Republicans have called their victory a rebuke of Barack Obama’s policies.

“They are frustrated by the gridlock. They’d like to see some co-operation, and I think all of us have the responsibility – me in particular – to try and make that happen.” 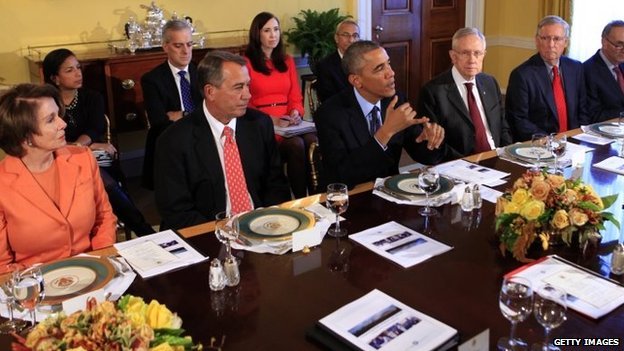 “Those are all going to be areas where I’m very interested in hearing and sharing ideas,” he said.

On November 6, the Republicans won control of the Senate and solidified their hold on the House of Representatives.

With the Republicans in control of both houses of Congress, the party can complicate, if not block completely, Barack Obama’s agenda in the last two years of his tenure in the White House.

Control of the Senate could also enable the Republicans to stymie his ability to name new federal judges, cabinet members and senior government officials.

The new Congress will be sworn in on January 3.

Following the election, Barack Obama and senior Republicans pledged to work together to end the political gridlock that has virtually paralyzed Congress and that reached its culmination with the shutdown of the US government in a budget stalemate last year.

The midterm election campaign was characterized by widespread frustration expressed by voters about the inability of the two parties to work together.

In the wake of the Republican gains, Mitch McConnell vowed to make the Senate function and pass bills, after sessions that were the least productive in the chamber’s history.