The fugitive mayor of the Mexican town of Iguala, where 43 students went missing in September, has been arrested, officials announce.

Mexican officials have accused Jose Luis Abarca of ordering police to confront the students on the day of their disappearance on September 26.

Eyewitnesses described seeing them being bundled into police cars.

Mexican officials had issued an arrest warrant for Jose Luis Abarca and Maria de los Angeles Pineda after Iguala police officers said they had received an order from the mayor to intercept the students.

The officers said they had been told to stop the students from interrupting a speech given by Maria de los Angeles Pineda in Iguala on that day.

The students, from a nearby teacher training college, had travelled to Iguala to raise funds and protest.

They have not been seen since. A search has uncovered a series of mass graves in the area, but initial tests suggested they were not those of the students. 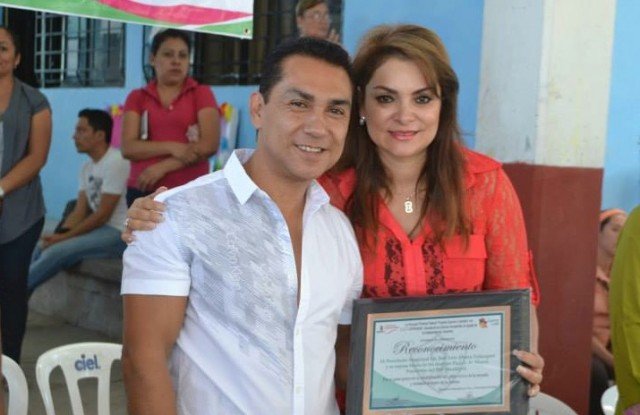 Since then, more bodies have been uncovered and officials have cast doubt on the accuracy of the initial tests.

More forensic tests are currently being carried out.

Jose Luis Abarca and Maria de los Angeles Pineda were arrested in a flat they had rented in Mexico City, media reports said.

They did not resist the arrest.

They have been taken for questioning. Officials hope they will be able to shed light on the whereabouts of the students.

The events of September 26 have shocked Mexicans and have led to mass protests demanding that the authorities do more to find the missing students.

The 43 were part of a larger group which had gone to Iguala to protest against what they said were discriminatory hiring practices.

The students all attended a teacher training college in Ayotzinapa with a history of left-wing activism, and their presence in Iguala raised alarm bells with the local authorities.

When the students boarded busses to return to their college, they were stopped by police – allegedly on the orders of Mayor Jose Luis Abarca.

The officers opened fire and killed three students and three people in nearby vehicles.

They stopped one busload of students trying to flee and took them to a local police station.

According to police officers detained as part of the investigation, they then handed the students over to a local drugs gang.

The gang’s leader, who has also been arrested, says he ordered the students be “made to disappear”, after having been told they belonged to a rival gang.

However, he did not specify further what happened to them.

The gang leader also accused Maria de los Angeles Pineda of being “the main operator of criminal activities in Iguala”.

The relatives of the missing students said on November 3 that “no progress” had been made in the search for the 43 and expressed their anger over the slow pace of the investigation.

The governor of the state of Guerrero, where Iguala is located, resigned last month over the disappearances.