A US research suggests that signs warning shoppers how much exercise they need to do to burn off calories in sugary drinks can encourage healthier choices.

A study of teenagers’ purchasing habits found they bought fewer sugary drinks and more water when the signs were up.

The most effective sign said it took five miles to walk off the 250 calories in a sugary drink.

Study leader Dr. Sara Bleich, associate professor at the Bloomberg School, John Hopkins University, said people do not understand calorie content on its own on a label.

“What our research found is that when you explain calories in an easily understandable way such as how many miles of walking is needed to burn them off, you can encourage behavior change.”

For six weeks, the brightly colored signs were displayed in corner shops in neighborhoods in Baltimore, in full view of young customers buying sugary drinks.

Four different signs were used in the shops. Two translated the calories in the drinks into the amount of exercise needed to burn off those calories.

One sign said it would take 50 minutes of running to work off the 250 calories – or 16 teaspoons of sugar – contained in a 590ml bottle of fizzy drink, sports drink or fruit juice.

The remaining signs listed the sugar content of the drink and the calories contained in the drink. 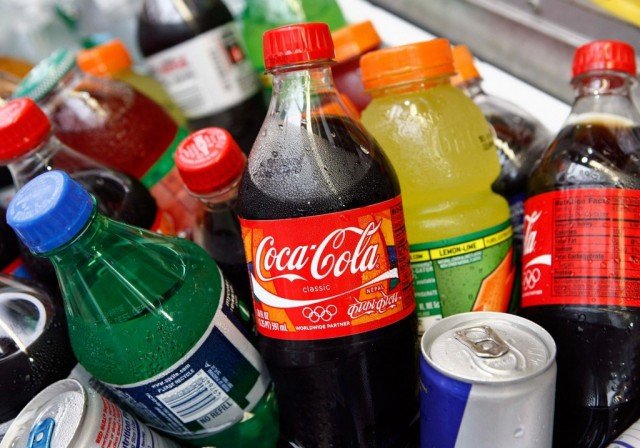 To find out the impact of the signs, the researchers – writing in the American Journal of Public Health – interviewed children aged between 12 and 18 years old leaving the shop.

Out of the 35% of those interviewed who said they saw the signs, 59% said they believed the sign and 40% said their behavior had changed as a consequence.

Before the signs were put up, 98% of drinks bought in the shops were sugary ones. After six weeks, this was reduced to 89%.

During the time the signs were on view, sales of larger bottles of fizzy drinks went down from 54% to 37% of all purchases.

The percentage of teenagers who chose to buy no drink at all in the shops increased from 27% to 33%.

This change in behavior continued for several weeks after the “exercise” signs were taken down, the study adds.

In total, more than 3,000 drinks purchases were observed by the research team.

Dr. Sara Bleich said the findings could help in the fight against obesity: “This is a very low-cost way to get children old enough to make their own purchases to drink fewer sugar-sweetened beverages and they appear to be effective even after they are removed.

“Using these easy-to-understand and easy-to-install signs may help promote obesity-prevention or weight loss.”