The Euro 2016 qualifier between Serbia and Albania was abandoned after a drone carrying a political message sparked clashes involving players and fans on the Partizan Stadium pitch.

The match, refereed by English official Martin Atkinson, was suspended in the 41st minute at 0-0.

Trouble flared when an Albanian flag and message flew above the pitch and was caught by a Serbia player.

Albania players tried to take it before several fans broke onto the pitch.

Martin Atkinson led the players off the field and, after a delay of around 30 minutes, UEFA confirmed the match had been abandoned.

Albanian fans had been banned from attending the qualifier between the two Balkan rival nations. 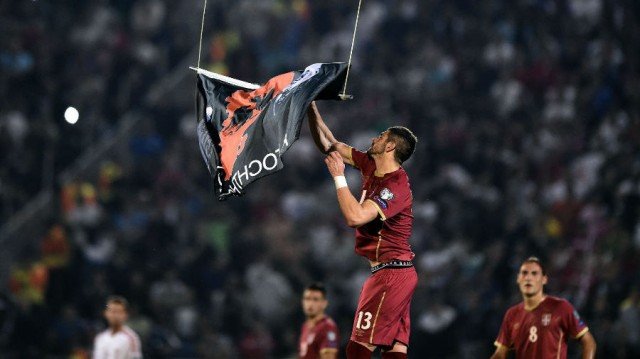 Serbia and Albania have a history of turbulent relations, predominantly in relation to the former Serbian province of Kosovo, which declared independence in 2008.

Kosovo has been recognized by the United States and major European Union countries, but Serbia refuses to do so, as do most ethnic Serbs inside it.

“It is a regretful situation on which we will report; the referee, myself and the security adviser. The circumstances were such that we couldn’t continue the match,” UEFA match delegate Harry Been said.

“You all saw what happened and I cannot comment on who is to blame or what to blame. I will submit a report with my colleagues to UEFA and UEFA will decide what will happen further.”

Serbian national broadcaster RTS reported that Olsi Rama, the brother of Albanian PM Edi Rama, was arrested in the stadium’s VIP box for instigating the drone stunt, but this could not be confirmed.