Journalist John Cantlie delivers a scripted message responding to President Barack Obama’s recent speech on the anniversary of the 9/11 attacks.

John Cantlie appears sat at a desk against a black backdrop, following the same format as in previous videos.

The message ends with a comment by him that Islamic State (ISIS) says it welcomes meeting with what is described as President Barack Obama’s under-construction army.

There are no signs of violence in the video but in the first of these messages John Cantlie made clear he was speaking as a prisoner whose life was in danger. 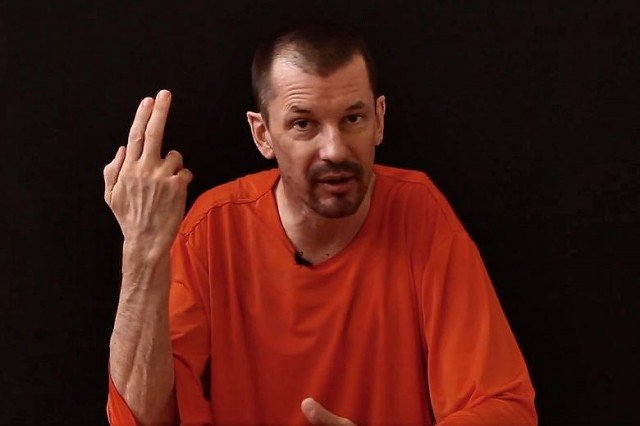 John Cantlie, an experienced journalist and photographer, has twice been held captive in Syria

At the end of the five-and-a-half minute film he indicates there will be further messages.

The video comments on Barack Obama’s speech: “It was all disappointingly predictable; America is good, the Islamic State is bad; and they will be defeated using aircraft and a motley collection of fighters on the ground. For their part the Islamic State say they welcome meeting Obama’s under-construction army.”

John Cantlie, an experienced journalist and photographer, has twice been held captive in Syria.

He was kidnapped in July 2012, and handcuffed and blindfolded for a week, but escaped with the help from the Free Syrian Army.

A second kidnap happened when he returned to Syria towards the end of 2012.

Islamic State – also known as ISIL – has taken control of large areas of Syria and Iraq and declared a caliphate.

Since August, ISIS has filmed and posted online the deaths of three Western hostages who were beheaded.