Researchers hope the good mosquitoes will multiply, breed and become the majority, thus reducing cases of the disease.

The initiative is part of a program also taking place in Australia, Vietnam and Indonesia.

The intercellular bacteria, Wolbachia, being introduced cannot be transmitted to humans.

The program started in 2012 says Luciano Moreira of the Brazilian research institute Fiocruz, who is leading the project in Brazil.

“Our teams performed weekly visits to the four neighborhoods in Rio being targeted. Mosquitoes were analyzed after collection in special traps.

“Transparency and proper information for the households is a priority.”

Ten thousands mosquitoes will be released each month for four months with the first release in Tubiacanga, in the north of Rio de Janeiro. 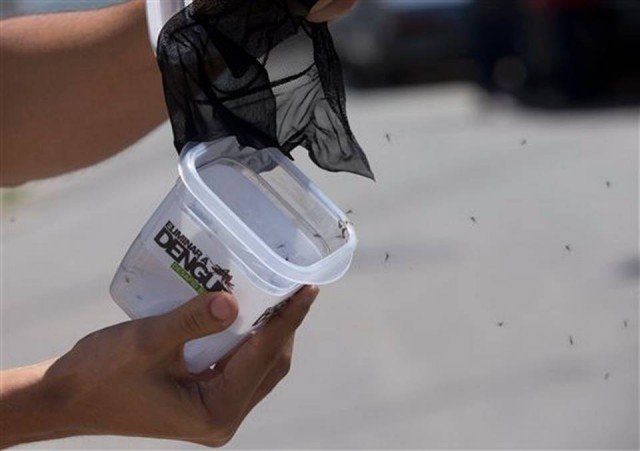 The bacterium Wolbachia is found in 60% of insects. It acts like a vaccine for the mosquito which carries dengue, Aedes aegypti, stopping the dengue virus multiplying in its body.

Wolbachia also has an effect on reproduction. If a contaminated male fertilizes the eggs of a female without the bacteria, these eggs do not turn into larvae.

If the male and female are contaminated or if only a female has the bacteria, all future generations of mosquito will carry Wolbachia.

As a result, Aedes mosquitoes with Wolbachia become predominant without researchers having to constantly release more contaminated insects.

In Australia this happened within 10 weeks on average.

The research on Wolbachia began at the University of Monash in Australia in 2008. The researchers allowed the mosquitoes to feed on their own arms for five years because of concerns at the time Wolbachia could infect humans and domestic animals.

Three more neighborhoods will be targeted next, and large scale studies to evaluate the effect of the strategy are planned for 2016.

Dengue fever re-emerged in Brazil in 1981 after an absence of more than 20 years.

Over the past 30 years, seven million cases were reported.