Home Breaking News 45,000 Syrians flee to Turkey in past 24 hours

According to Turkish officials, some 45,000 mainly Syrian Kurds have crossed into Turkey in the past 24 hours as Islamic State (ISIS) militants advance in northern Syria.

Turkey opened its border on September 19 to Syrians who had fled the Kurdish town of Kobane in fear of an IS attack.

Activists say some 300 Kurdish fighters have crossed into Syria from Turkey to help defend the strategic town.

ISIS controls large areas of Syria and Iraq and has seized dozens of villages around Kobane, also called Ayn al-Arab.

Turkey – which shares a border with Iraq and Syria – has taken in more than 847,000 refugees since the uprising against Syrian President Bashar al-Assad began three years ago.

Turkish Deputy PM Numan Kurtulmus confirmed on Saturday that 45,000 refugees had crossed the border within a 24-hour period.

“No country in the world can take in 45,000 refugees in one night, bring them here unharmed and find them a shelter without a problem,” he said. 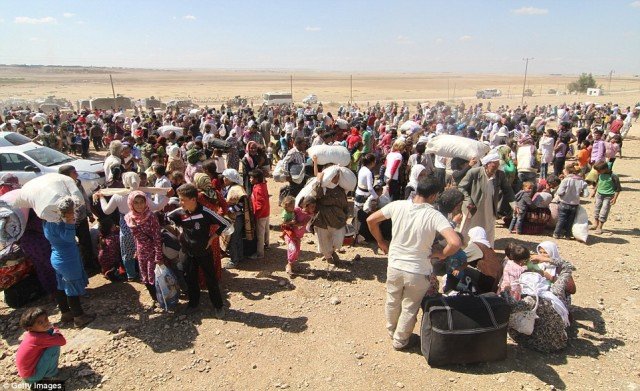 Some 45,000 mainly Syrian Kurds have crossed into Turkey in the past 24 hours as ISIS militants advance in northern Syria

The UK-based Syrian Observatory for Human Rights said at least 300 Kurdish fighters had joined Syrian Kurdish ranks in the Kobane area to fend off the IS advance. The activist group did not specify which Kurdish group the fighters belonged to.

“Islamic State sees Kobane like a lump in the body, they think it is in their way,” the Observatory’s Rami Abdulrahman said.

Syrian activists say IS has seized as many as 60 villages surrounding Kobane since fighting began earlier this week.

The head of Syria’s Kurdish Democratic Union, Mohammed Saleh Muslim, has appealed for international assistance in the battle against the jihadists.

“Kobane is facing the fiercest and most barbaric attack in its history,” Reuters news agency quoted him as saying.

“Kobane calls on all those who defend humane and democratic values… to stand by Kobane and support it immediately. The coming hours are decisive,” he added.