The family of James Foley – the kidnapped American journalist killed by Islamic State militants last week – has posted a letter they say he sent while in captivity, via a fellow hostage.

James Foley was unable to write letters to his family because they were confiscated by his jailers.

Instead he asked another hostage who was about to be released to commit his letter to memory.

When that hostage was freed he dictated the letter to James Foley’s mother, Diane.

The family posted the letter on Sunday evening, on a Facebook page they had set up to campaign for James Foley’s release.

Earlier they had attended a memorial mass for James Foley in their home town of Rochester, New Hampshire. 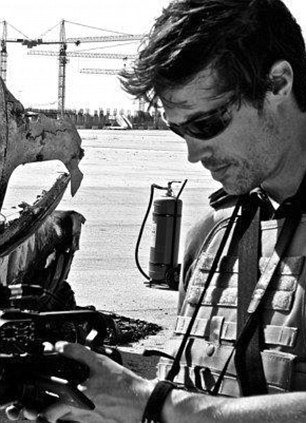 James Wright Foley, 41, a freelance journalist was abducted in northern Syria in November 2012, while covering that country’s civil war.

Last week, Islamic State militants released a video showing his killing by a masked man with a British accent.

On Sunday, the British ambassador to the US told CNN that British officials were close to identifying the killer.

I remember going to the Mall with Dad, a very long bike ride with Mom. I remember so many great family times that take me away from this prison. Dreams of family and friends take me away and happiness fills my heart.

I know you are thinking of me and praying for me. And I am so thankful. I feel you all especially when I pray. I pray for you to stay strong and to believe. I really feel I can touch you even in this darkness when I pray.

Eighteen of us have been held together in one cell, which has helped me. We have had each other to have endless long conversations about movies, trivia, sports. We have played games made up of scraps found in our cell… we have found ways to play checkers, Chess, and Risk… and have had tournaments of competition, spending some days preparing strategies for the next day’s game or lecture. The games and teaching each other have helped the time pass. They have been a huge help. We repeat stories and laugh to break the tension.

I have had weak and strong days. We are so grateful when anyone is freed; but of course, yearn for our own freedom. We try to encourage each other and share strength. We are being fed better now and daily. We have tea, occasional coffee. I have regained most of my weight lost last year.

I think a lot about my brothers and sister. I remember playing Werewolf in the dark with Michael and so many other adventures. I think of chasing Mattie and T around the kitchen counter. It makes me happy to think of them. If there is any money left in my bank account, I want it to go to Michael and Matthew. I am so proud of you, Michael and thankful to you for happy childhood memories and to you and Kristie for happy adult ones.

And big John, how I enjoyed visiting you and Cress in Germany. Thank you for welcoming me. I think a lot about RoRo and try to imagine what Jack is like. I hope he has RoRo’s personality!

And Mark… so proud of you too Bro. I think of you on the West coast and hope you are doing some snowboarding and camping, I especially remember us going to the Comedy Club in Boston together and our big hug after. The special moments keep me hopeful.

Katie, so very proud of you. You are the strongest and best of us all!! I think of you working so hard, helping people as a nurse. I am so glad we texted just before I was captured. I pray I can come to your wedding…. now I am sounding like Grammy!!

Grammy, please take your medicine, take walks and keep dancing. I plan to take you out to Margarita’s when I get home. Stay strong because I am going to need your help to reclaim my life.