The protesters refused to disperse before a midnight deadline. Police fired smoke bombs at them.

Missouri Governor Jay Nixon has imposed the curfew until 05:00 AM.

Hundreds of protesters gathered on the main road in Ferguson in poor weather conditions hours before the curfew was due to go into force on Saturday evening.

Many left peacefully but others shouted that they would not abide by the curfew.

Police warned the remaining demonstrators that they would be arrested unless they left the area. 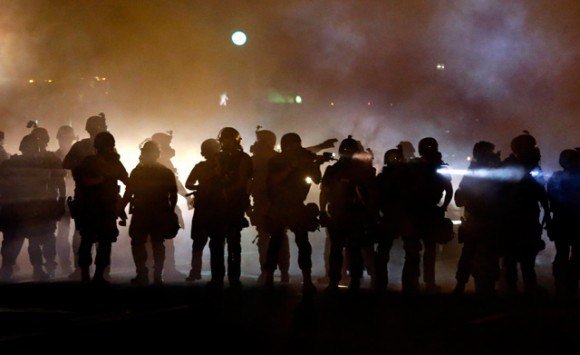 More than 150 people broke the overnight curfew imposed in Ferguson

They then fired smoke bombs, after which the protesters appeared to leave.

“I think the cops are going to get violent tonight, but they can’t lock us all up.”

“We must first have and maintain peace. This is a test. The eyes of the world are watching,” Jay Nixon said.

He also said the Department of Justice was bolstering its investigation of the shooting.

Ron Johnson gave a joint news conference with Governor Jay Nixon on Saturday afternoon at a church in Ferguson, where they were repeatedly interrupted by angry locals.

Police also released CCTV footage that it said showed Michael Brown stealing a pack of cigars from a convenience store and intimidating its owner shortly before he was killed.

However, Thomas Jackson said Michael Brown was not stopped because of the incident and that the officer who shot him did not know he was a robbery suspect.

Michael Brown’s family said they were “beyond outraged” by the video’s release, criticizing what they said was a police attempt to “justify the execution-style murder”.