Hadar Goldin was believed to have been captured by militants during fighting, leading to the collapse of a ceasefire shortly after it had been declared.

The Israel Defense Forces (IDF) said it had determined that Lt. Hadar Goldin had died.

Israeli PM Benjamin Netanyahu has said the operation in Gaza will continue until it restores security to Israeli citizens.

AFP news agency quoted Palestinian emergency services as saying 12 Palestinians had been killed early on Sunday but this has not been independently confirmed.

Hamas had denied it was holding the 23-year-old Hadar Goldin captive, saying it did not know the soldier’s whereabouts. 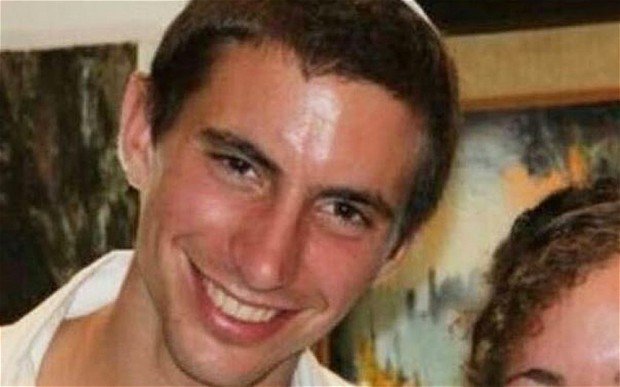 Lt. Hadar Goldin was believed to have been captured by Hamas militants during fighting

The military wing of the Islamist group said it had lost contact with some fighters in the area where Israel said the soldier had been seized.

It said it believed the fighters and possibly Hadar Goldin had been killed in an Israeli airstrike.

Israel’s defense minister and the chief military rabbi met the soldier’s family at their home in the town of Kfar Saba on Saturday night.

Hundreds of well-wishers had gathered outside their home and there was an outpouring of grief when the military’s announcement was made public.

Confirmation of Lt. Hadar Goldin’s death means 66 Israelis have now died in the fighting, all but two of them soldiers. A Thai worker in Israel also died.

Some 1,700 Palestinians, mostly civilians, have been killed since the conflict began more than three weeks ago.

Earlier, PM Benjamin Netanyahu vowed to continue the Israeli offensive in Gaza until “we achieve our objective of restoring security to you, Israeli’s citizens”.

“Hamas again mistakenly believes that the people of Israel do not have the will and determination to fight them and Hamas again will learn the hard way that Israel will do whatever it must do to protect its people,” he said.

The Islamist group would pay an “intolerable price” for attacks on Israel, Benjamin Netanyahu added.

Hamas spokesman Fawzi Barhoum dismissed Benjamin Netanyahu’s comments as “confused” and said the group would “continue to resist until we achieve our goals”.

Meanwhile, a UN spokesman in Gaza has warned that a “health disaster of widespread proportions is rapidly unfolding” there after three weeks of intense conflict.

Chris Gunness from the United Nations Relief and Works Agency (UNRWA) says Gaza’s medical services are “on the verge of collapse”.

“At least half of all public health primary care clinics in Gaza are closed,” he said, adding that the medical facilities still functioning are overwhelmed.

Chris Gunness also warned that there was a serious risk of an outbreak of waterborne and communicable diseases because of a lack of adequate water and poor sanitation.