Russia has been asked by the western countries to put pressure on Ukrainian rebels to allow unhindered access to the site of Thursday’s Malaysia Airlines crash.

Dutch PM Mark Rutte said he had told Russian President Vladimir Putin that time was “running out” to show he could help. Most crash victims were Dutch.

The US and Britain also told Russia full access to the area was needed.

Memorial services are being held in Australia, with more planned in other countries later on Sunday.

In Melbourne, a special mass was held for the HIV experts and campaigners on the flight who were making their way to the city for an international AIDS conference.

Both Ukraine and the pro-Russian rebels have accused each other of shooting down the Boeing 777, which was flying from Amsterdam to Kuala Lumpur.

Flight MH17 was reportedly hit by a missile over a rebel-held area in Donetsk region on Thursday. All 298 people on board died.

International observers have had their movements around the crash site restricted by pro-Russia militiamen. 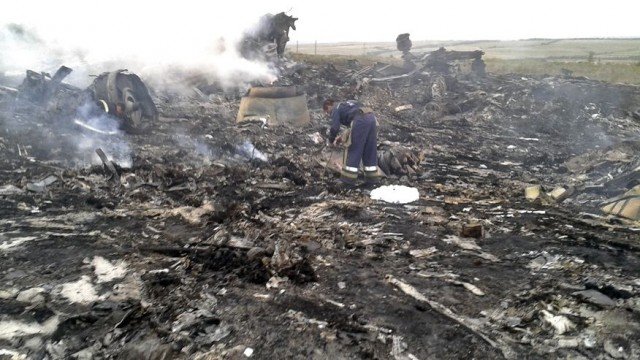 The US said it was “deeply concerned” at the limited access to the site.

“It is critical that there be a full, credible, and unimpeded international investigation as quickly as possible,” said a statement from the State Department in Washington.

Ukraine has accused militiamen at the site of the Malaysia Airlines crash of trying to destroy evidence of an “international crime”.

In a news conference on Saturday, Mark Rutte said he had had an “intense” phone call with Vladimir Putin.

“I told him <<Time is running out for you to show the world that you have good intentions>>,” Mark Rutte said.

He added that Dutch people were “furious” at pictures of bodies being carried across the open country, and called on Vladimir Putin “to show that he will do what is expected of him and will exert his influence”.

Monitors from the Organization for Security and Co-operation in Europe (OSCE) are at the crash site.

OSCE spokesman Michael Bociurkiw said access had improved compared to Friday and that the monitors were seeing parts of the terrain they had not seen before, but that their movements were still being restricted.

The monitors are there to observe the site ahead of the arrival of international investigators.

Tougher EU sanctions against Russia will be needed if Moscow does not change its “approach” to the downing of the plane, UK Prime Minister David Cameron has indicated.

David Cameron said the EU should stand up for its principles, amid claims Russia-backed rebels were involved.

PM David Cameron and his Australian counterpart Tony Abbott agreed the two countries would apply “further pressure” at the UN Security Council “for swift and unhindered access” to the site, Cameron’s office said.

US Secretary of State John Kerry discussed the disaster in a phone conversation with Russian Foreign Minister Sergei Lavrov.

John Kerry made clear that the US was “very concerned” over reports that bodies and debris from the site had been removed or tampered with, the state department said.

On Friday, President Barack Obama said Malaysia Airlines plane had been destroyed by a missile fired from a rebel area, and that insurgents would not be capable of carrying out such an attack without Moscow’s support.

Russia denies any involvement and has rejected Western allegations that it is stoking the Ukraine conflict.