Israel has restarted air strikes on Hamas-controlled Gaza, after its brief truce was met with continuing rocket fire.

But the armed wing of Hamas rejected the initiative as a “surrender”.

At least four Israelis have been seriously injured since the violence flared, but none have been killed.

The Israel Defense Forces said militants had fired 76 rockets into Israel on Tuesday. 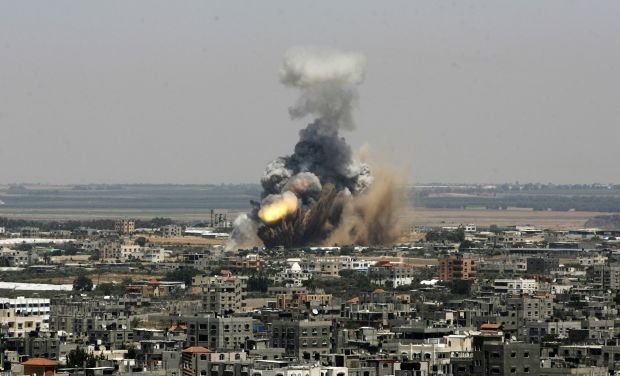 Israel has restarted air strikes on Hamas-controlled Gaza, after its brief truce was met with continuing rocket fire (photo AP)

It said that after resuming its air strikes, 30 targets had been attacked in Gaza, including 20 concealed rocket launchers, tunnels, a weapon storage facility and operational infrastructure used by a senior militant.

Under the terms of the Egyptian initiative, the ceasefire should have been followed by a series of meetings in Cairo with high-level delegations from the two sides.

There has been no definitive response to the initiative from Hamas.

US Secretary of State John Kerry said he could not “condemn strongly enough” Hamas’ actions in continuing to fire rockets.

Israel’s security cabinet, convened by PM Benjamin Netanyahu, had approved the truce on Tuesday morning, minutes before the proposed time for it to come into effect – at 09:00.

“We agreed to the Egyptian proposal in order to give an opportunity for the demilitarization of the [Gaza] Strip – from missiles, from rockets and from tunnels – through diplomatic means,” Benjamin Netanyahu had said.

But he had then added: “If Hamas does not accept the ceasefire proposal, as would now seem to be the case, Israel would have all international legitimacy to broaden the military operation to achieve the required quiet.”