Thunderstorms with powerful winds have hit northern New York killing at least 4 people and leaving more than 70,000 people without electricity.

Four residents of the rural town of Smithfield were found dead after several homes were destroyed by the fast-moving storms.

Madison County Sheriff Allen Riley told a local broadcaster investigators were searching for others in the rubble.

A boy at summer camp in Maryland was also killed when a tree fell. 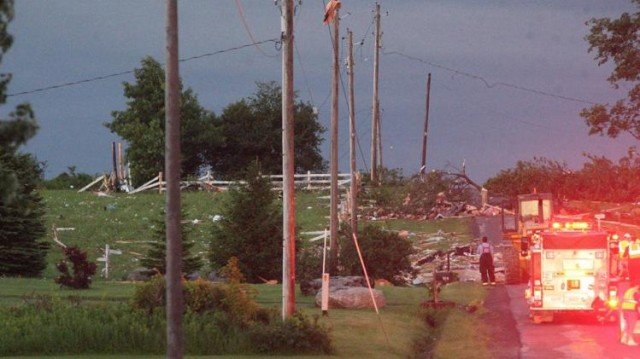 Six of his friends were injured in the same accident, which happened as they were moving to shelter.

Forecasters said winds from the storms in New York state were at least 60mph.

The National Weather Service said they were sending investigators to Smithfield to see if a tornado touched down.

Town Supervisor Rich Bargabos told the Syracuse Post Standard a mother and her four-month-old baby, a relative of the family and an unrelated neighbor had been killed.

“There is not a piece of framework together.”

Three small tornadoes touched down in Ohio, forecasters said, and another was spotted in Pennsylvania.

At the height of the outages on Tuesday, more than 300,000 homes and businesses were without electricity in the north-west area of the state.