Meanwhile, Celebdirty Laundry reported that Queen Elizabeth allegedly called Camilla Parker-Bowles a disgrace after trying to force the royal family into a $350 million divorce pay out to buy her silence.

“Camilla isn’t likely to go without a fight though,” GLOBE Magazine claims.

“This chick has always been in it either for the crown or for a nice payday and so expect her to dig in her heels on this one. She has also been at Charles’ side for over 3 decades so she certainly does have a lot of dirt on him.” 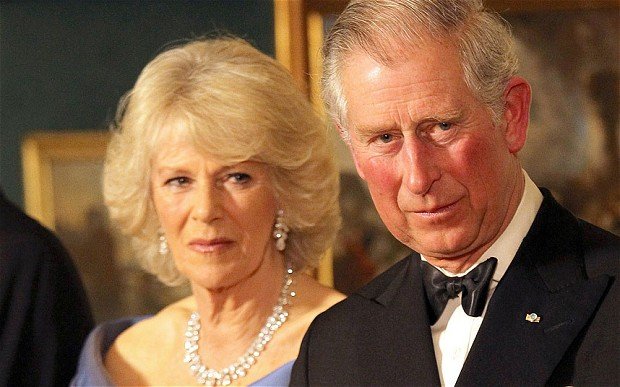 The divorce claims intensified after Prince Charles and Camilla went on their Canadian tour after Prince William and Kate Middleton won rave reviews on their three-week tour in New Zealand and Australia. Although the couple fought against going, the Queen insisted they needed to do this to earn the public trust and after spending three and a half days on a 41 engagement with his wife, Charles packed up his bags as soon they got home.

“Upon landing in Nova Scotia on May 18th Camilla exclaimed that it would take a lot of booze to survive,” according to GLOBE‘s June 9th print edition.

“It caused constant fighting and Charles was raging every time his drunken wife threw back another gin martini.”

Prince Charles and the Duchess of Cornwall were photographed recently as they paid tribute to Wales’ coal miners on the fourth day of their tour in the region. During their visit to Senghenydd, near Caerphilly, Prince Charles was spotted placing a wreath at the foot of the Welsh National Mining Memorial. Charles and Camilla also opened the Aber Valley Heritage Centre that features the history of the south Wales valleys.

“My wife and I have so enjoyed this opportunity to meet you all and if I may say so to have a chance to pay our respects at the memorial,” Prince Charles said as he paid tribute to the courage of the miners, and to those who lost their lives for digging the precious coal that helped Britain’s economy.