Italy’s PM Silvio Berlusconi has been filmed carrying out his community service at a nursing home near Milan.

The footage shows Silvio Berlusconi dressed in a white lab coat, joking with elderly residents at the hospice.

Silvio Berlusconi, 77, was ordered in May to help out at the Sacra Famiglia center as part of his one year sentence for tax fraud. 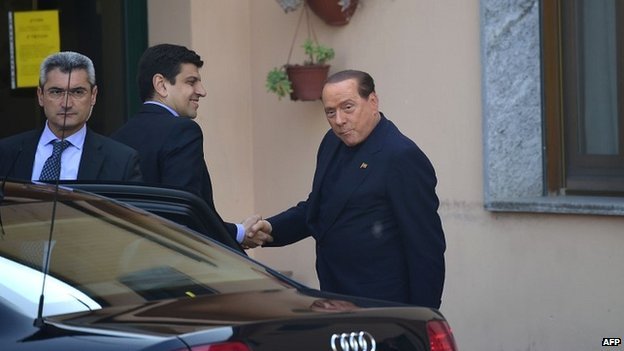 Until now, doctors had imposed a news blackout on how exactly Silvio Berlusconi was getting on after trading his customary late night carousing with young show girls for more sedentary mornings entertaining the elderly.

The video, filmed on a smart phone, shows Silvio Berlusconi sitting in the centre’s recreation room, smiling and joking with a group of elderly residents, some in wheelchairs, before he strolls over the vending machine to chat to two younger women.

As he cracks jokes, some of the patients clap along to an old fashioned Italian accordion record being played.