Home Entertainment Angela Merkel misses Who Wants To Be A Millionaire Phone-a-Friend call from...

Wolfgang Bosbach, a political ally of German Chancellor Angela Merkel, phoned her during a celebrity version of Who Wants To Be A Millionaire, hoping she could answer a question – but in vain.

Twice Wolfgang Bosbach called during RTL’s show, but all he got was the chancellor’s voicemail.

Thwarted by Angela Merkel’s silence he bowed out, winning 125,000 euros. The question was about an East German washing machine. 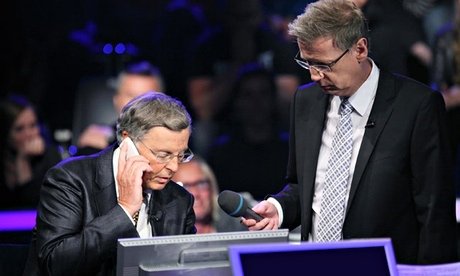 Angela Merkel grew up in the former communist East Germany.

The correct answer was that many owners also used it to stew fruit.

When asked if he wanted to phone a friend, Wolfgang Bosbach suggested the chancellor, explaining that “she’s always happy to see me and hear my voice”.

A correct answer from Angela Merkel would have won him 500,000 euros to spend on good causes.

At the end of the show he received a text back from Angela Merkel saying: “Ok whatever it was, warm greetings from am.”

Wolfgang Bosbach is currently deputy chairman of Angela Merkel’s CDU/CSU parliamentary group. He is a specialist in German domestic policy and legal affairs. He joined the CDU in 1972.