Home World U.S. News Edward Snowden describes him as a high-tech spy for NSA and CIA...

Edward Snowden has described himself as a trained spy specializing in electronic surveillance, dismissing claims he was a mere low-level analyst.

In an interview with NBC, Edward Snowden reiterated that he had worked undercover overseas for the CIA and NSA. This is the first interview with the former NSA employee for an American television. The NBC interview will air next week.

Edward Snowden, 30, fled the US in May 2013 and has been living under temporary asylum in Russia. 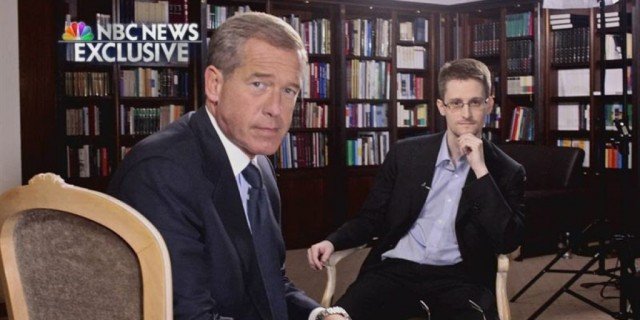 In an interview with NBC’s Brian Williams, Edward Snowden said he had trained as a spy (photo NBC)

Last year, he fed a trove of secret NSA documents to news outlets including the Washington Post and the Guardian.

Among other things, the leaks detailed the NSA’s practice of harvesting data on millions of telephone calls made in the US and around the world, and revealed the agency had snooped on foreign leaders.

The revelations have sparked a debate in the US over the appropriate role of the NSA and the extent to which it should be authorized to conduct such broad surveillance.

President Barack Obama has asked Congress to rein in the program by barring the NSA from storing phone call data on its own and to require it to seek a court order to access telecom companies’ records.

Last week, the US House passed such legislation, sending it to the US Senate.

In excerpts of an interview with NBC’s Brian Williams, Edward Snowden said he had trained as a spy “in sort of the traditional sense of the word in that I lived and worked undercover overseas – pretending to work in a job that I’m not – and even being assigned a name that was not mine”.

But he described himself as a technical expert who did not recruit agents.

“What I do is I put systems to work for the US,” he said.

“And I’ve done that at all levels from the bottom on the ground all the way to the top. Now, the government might deny these things, they might frame it in certain ways and say, <<Oh well, you know, he’s – he’s a low-level analyst>>.”

Edward Snowden said he had worked for the CIA and NSA undercover, overseas, and lectured at the Defense Intelligence Agency.

When Edward Snowden fled the US, he had been working as a technician for Booz Allen, a giant government contractor for the National Security Agency.