Egypt is voting in new presidential election, for the second time in two years.

A huge security operation has been mounted for the polls to elect a successor to Mohamed Morsi, Egypt’s first democratically elected leader who was ousted by the army last year.

Analysts predict an easy victory for Abdul Fattah al-Sisi, the former army chief who led the removal of Mohamed Morsi.

The only other candidate is veteran left-winger Hamdeen Sabahi. 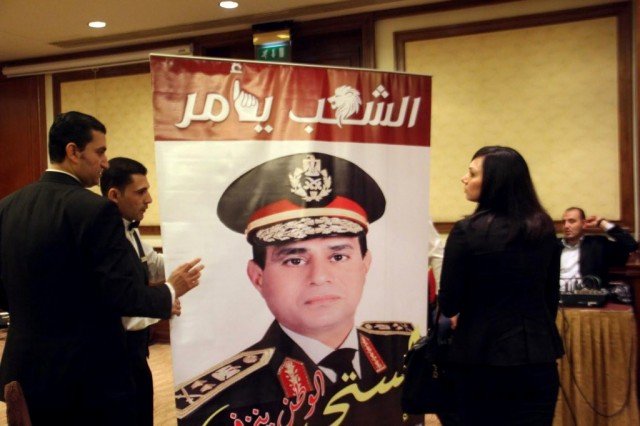 Analysts predict an easy victory for Abdul Fattah al-Sisi, the former army chief who led the removal of Mohamed Morsi

Abdul Fattah al-Sisi, 59, appeals to Egyptians who crave stability after years of political upheaval and anything else than an easy win for him would be a source of astonishment.

President Mohamed Morsi was deposed last July following mass protests and he is standing trial on a raft of charges. He strongly denies any wrongdoing.

Egypt’s interim authorities have since clamped down hard on Mohamed Morsi’s Islamist movement, the Muslim Brotherhood, declaring it a “terrorist organization”.

More than 1,400 people have been killed and 16,000 arrested, including the Brotherhood’s senior leaders.

In his election campaign, Abdul Fattah al-Sisi has set out plans to develop agriculture, housing, education, impoverished areas and employment.

He is backed by several big businessmen as well as a broad range of political parties from the Islamist right to the moderate left.

Hamdeen Sabahi, a previous presidential contender, offers an alternative to young voters who favor a civilian candidate over a former military one.

He promises to combat corruption and incompetence while promoting civil rights.

Both candidates say they will not re-legalize the Muslim Brotherhood.