Pregnant Christina Ricci debuted her baby bump as she arrived with her husband James Heerdegen at LAX airport in Los Angeles on Friday. 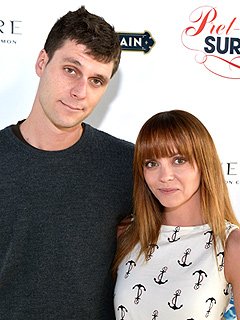 Christina Ricci, 34, is expecting her first child with James Heerdegen, her rep confirms to Us Weekly.

The actress wore leggings and an oversized long-sleeve shirt. She accessorized with a brown belt placed below her chest, which accentuated her growing belly.

Christina Ricci and James Heerdegen tied the knot on the Upper East Side in New York City last October. The couple exchanged vows in an intimate ceremony at the Harold Pratt House and Peterson Hall and was feted by close family and friends.

Christina Ricci and James Heerdegen first met on the ABC series Pan Am in 2011.