At least 14 soldiers died in a dawn attack on a checkpoint in eastern Ukraine.

This is the worst loss of life for Ukrainian government forces to date.

Heavily armed militants attacked the checkpoint in the Volnovakha area, in one of four attacks reported overnight in eastern Ukraine. 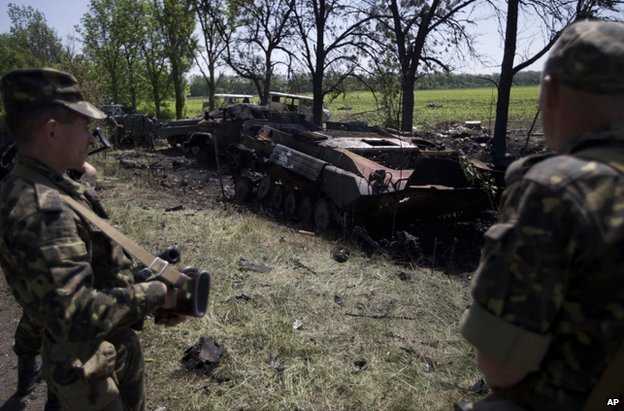 Ukraine’s interim PM Arseny Yatseniuk has called for an emergency session of the UN Security Council, saying he has evidence of Russian involvement in the violence.

Russia appears to be withdrawing troops from its border with Ukraine, easing fears of a military intervention like in Crimea in March.

NATO chief Anders Fogh Rasmussen said in a tweet that Russian troop activity near the Ukraine border might suggest that some Russian forces were preparing to pull back.

Russian President Vladimir Putin ordered troops near the border to withdraw to their bases earlier this week. Correspondents say removing the troops – estimated to number 40,000 – could help de-escalate the Ukraine crisis.

Ukrainians go to the polls on Sunday to choose a new president but voting in Donetsk and Luhansk has been seriously disrupted by the insurgency there.

The election was called after the last elected President, Viktor Yanukovych, was deposed in February amid mass protests against his pro-Russian policies.

Photographs taken by an Associated Press news agency crew show bodies lying in a field or inside a car outside the village of Blahodatne, which is near the town of Volnovakha.

Three charred armored infantry vehicles, their turrets blown away by powerful explosions, and several burned lorries could also be seen.

Residents told AP the attackers had used an armored bank lorry which the unsuspecting Ukrainian soldiers had waved through the checkpoint. The attackers then reportedly shot down the soldiers at point-blank range.