Soma Holding, the operator of the mine that collapsed, killing at least 284 people in Turkey, has denied any negligence.

Representatives from Soma Holding defended their response to the disaster, telling a news conference their priority had been to save lives.

They added that an unexplained build-up of heat in the mine appeared to have caused the collapse.

It was Turkey’s worst-ever mine disaster and has sparked angry protests against the government.

There are thought to be up to 18 workers still trapped inside the mine, according to Turkish ministers and Soma Holding. It is not clear if the men are still alive. 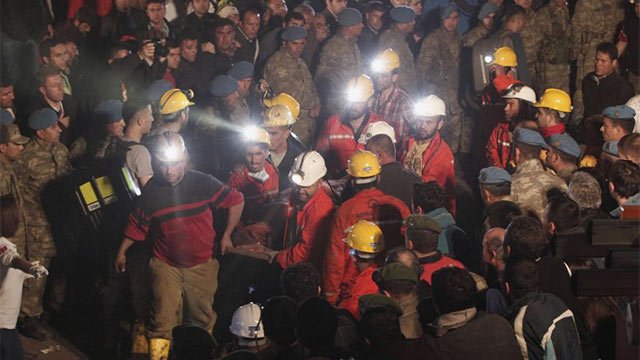 At least 284 people died in Soma mine explosion in Turkey

The disaster began when an explosion on Tuesday sent carbon monoxide gas into the mine’s tunnels while 787 miners were underground.

Energy Minister Taner Yildiz said that a fire was still burning inside the mine, but it was “declining”.

Anyone negligent about safety at the mine would be punished, Taner Yildiz said: “We won’t take any notice of their tears.”

Speaking to journalists, plant manager Akin Celik said: “We still do not know how the accident happened. There is no negligence of ours in this incident.”

“We want to find answers as well. We have never faced such conditions, such circumstances. We haven’t slept for three days because we’re first trying to save lives.”

Soma Holding executives said it was not clear what caused the explosion and collapse.

However, General Director Ramazan Dogru said reports that the fire began at a transformer were wrong.

“Overheating led to a collapse” at another part of the mine, he said, adding that this caused a fire which rapidly expanded. He said it was not clear why the overheating had occurred.

Much of the news conference focused on whether the mine had rescue chambers – safe rooms where miners can take refuge for an extended period of time.

Rescue chambers were not a legal requirement, and the mine had an escape route for workers, they added.

Company chief Alp Gurkan said he was “saddened” by the disaster, and that he “couldn’t believe what [he] was hearing” when he heard the news.

“All the high-level mining experts in Turkey have seen this as the safest mine. We have difficulty in understanding how this event has happened,” he said.

PM Recep Tayyip Erdogan has been criticized for being insensitive in his reaction to the disaster, by appearing to suggest that it was a fact of life.

His aide Yusuf Yerkel made headlines on Thursday when photos emerged of him appearing to kick a protester in Soma.

Later pictures of Recep Tayyip Erdogan appearing to slap a protester in a local supermarket were also shown in the Turkish media.

The Soma mine was privatized in 2005. The government has been accused of rejecting a recent proposal for an inquiry into mine accidents, but officials say the Soma mine was subject to regular inspections, most recently in March.