Two and a Half Men will end after Season 12, CBS network confirmed.

Nina Tassler didn’t know whether bringing Charlie Sheen’s character back from the dead would be one of the shocks in store.

CBS confirmed the last episode will air in 2015.

Two and a Half Men has seen a number of real-life controversies since it began in 2003. As producers announce it is ending, we take a look back at some of the most talked-about moments.

After months of media reports about his personal life, Warner Bros terminated Charlie Sheen’s contract after “careful consideration” in March 2011. 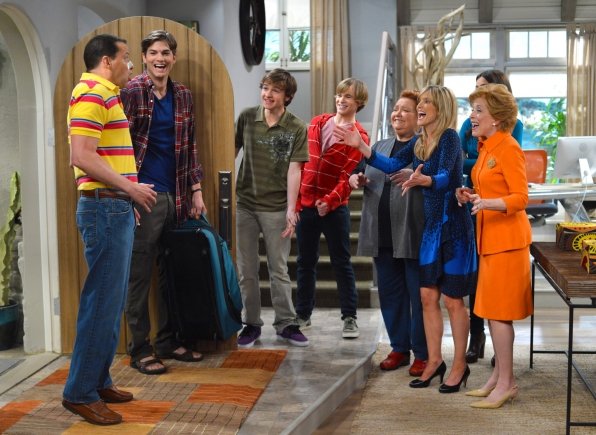 Two and a Half Men will end after Season 12

In previous weeks, Charlie Sheen had given a number of angry, rambling interviews. He insisted he was drug-free after undergoing rehabilitation earlier in the year.

Charlie Sheen had a contract for $2 million per episode but before his sacking had said he was being paid too little and demanded $3 million.

A court had ordered Charlie Sheen to rehab in 2010 after he pleaded guilty to assaulting his wife at the time, Brooke Mueller Sheen.

Ashton Kutcher, known for his previous roles on That 70s Show and the prank show Punk’d, was announced as Charlie Sheen’s replacement in May 2011.

“I can’t replace Charlie Sheen but I’m going to work my ass off to entertain the hell out of people,” Ashton Kutcher said at the time.

Ashton Kutcher would later go on to be the highest paid actor on US TV, earning $24 million in 2012 according to the Forbes rich list.

The first episode of Season 9 was watched by 28.7 million people in the US when it was aired in September 2011, giving the show its highest ratings since it began.

It saw Charlie Sheen’s character, Charlie Harper, being killed off, after his real-life sacking from the program.

Old girlfriends turned up at his funeral before it was revealed he had been killed by a Paris Metro train. The episode also saw the arrival of Ashton Kutcher’s character.

Angus T. Jones, the child star of the show, stepped back from Two and a Half Men after describing it as a “filth” and urging viewers not to watch it.

Angus T. Jones later apologized and appeared in a number of episodes in 2013, before eventually quitting entirely.