A mine explosion in western Turkey has killed 245 people, with 80 injured, according to Energy Minister Taner Yildiz, and the toll could rise with many more still trapped.

Anger has erupted against the Turkish government after the deadly coal mine disaster in the western town of Soma.

People in Soma hurled abuse as they surrounded Prime Minister Recep Tayyip Erdogan’s car during his visit to the scene of the tragedy, and protesters clashed with police in Istanbul and Ankara.

Rescuers are still hunting desperately for scores of miners who are missing but feared dead.

Nearly 450 workers have been rescued, according to the mine operator. However, no survivors have been found in the last few hours and more than 100 are still unaccounted for.

Eighty of those rescued had been treated for injuries, none of which were described as serious. 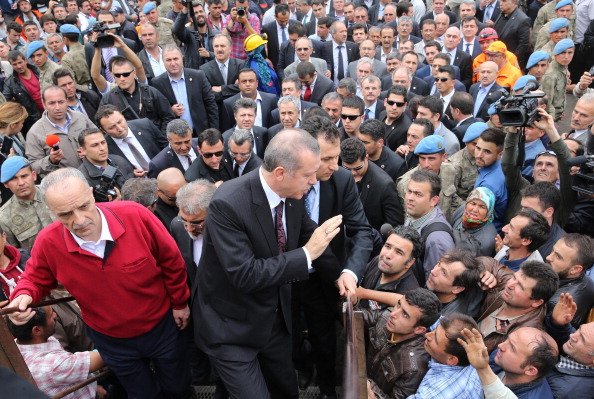 Local media reports said protesters in Soma kicked Recep Tayyip Erdogan’s car and called for his resignation after he gave a news conference on the disaster.

Recep Tayyip Erdogan was booed as he emerged from his car. Some arrests were made amid the scuffles and pictures showed the prime minister, surrounded by bodyguards, seeking refuge in a shop. Protesters also attacked the town’s ruling AK party offices.

Meanwhile, police in Ankara fired tear gas and water cannon at about 800 protesters who tried to march from a university to the energy ministry.

There were also reports of a protest in Istanbul outside the headquarters of Soma Holding, the company that owns the mine.

Recep Tayyip Erdogan has faced criticism on social media for being insensitive, after he cited numerous mining accidents throughout the world, including in Britain in the 19th Century, in defending the Turkish government’s record.

He said every effort would be made to find the missing miners, and promised a full investigation.

“I just want everybody to know that the disaster will be investigated in every aspect and will continue to be investigated and we are not going to allow any negligence, or leave any stone unturned,” he said.

Family members of missing miners gathered at the hospital. They told him they would not move from there until they got information about their loved ones.

Energy Minister Taner Yildiz said 787 people had been inside the mine when an electrical fault triggered the blast soon after midday on Tuesday. Many of them died of carbon monoxide poisoning.

Fires were reportedly still burning in the mine 18 hours after the blast.

Dogan news agency reported that one of the dead miners, named as Kemal Yildiz, was only 15 years old.

The electrical fault triggered a power cut, making the mine cages unusable. Those trapped are reported to be 1.2 miles below the surface and 4km from the mine entrance.

Hours after the explosion, TV footage showed rescuers helping workers from the mine, their faces and hard-hats covered in soot and dust and some on stretchers.

Only the dead were being recovered by mid-morning on Wednesday.

Coal mining is a major industry in the Soma area, helping to supply a nearby lignite-fired thermal power plant, but safety has long been a concern. Nearly 40% of Turkey’s electricity production depends on coal.