In an interview with CNN’s Anderson Cooper, LA Clippers owner Donald Sterling finally spoke about his racist comments that were leaked in April.

Donald Sterling, 81, apologized for his comments, slammed Magic Johnson and other wealthy African Americans for not doing enough to help minorities, and even insinuated that Anderson Cooper is more of a racist than he is.

Early on in the interview, Donald Sterling tried to gain viewers’ sympathy by describing what his granddaughter had to go through at school after the tapes were released.

“My little grandchild goes to a Catholic nursery, and they were passing around candy to everybody. When they got to her, they said, <<We don’t give candy to racists>>. So it hurts me,” he said.

Donald Sterling took the stance of being set up by V. Stiviano and being “baited” into the comments. He claimed that jealousy is what fueled his comments and not race.

“One of the things that I said was <<don’t bring blacks to my game>>. Twenty-five percent of the people at my games is black. She would always use the black word. That’s a black girl.

“So when she said I’ll bring four gorgeous black guys to the game, players, I was a little jealous, maybe.”

While on the topic of jealousy, Donald Sterling also asked if Anderson Cooper could relate to him being jealous when it comes to women. 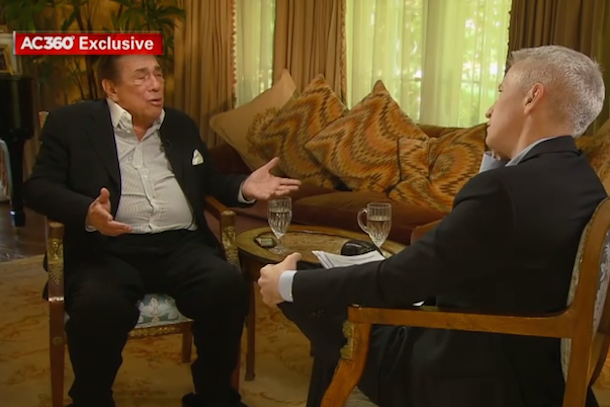 Donald Sterling apologized for his comments, slammed Magic Johnson and even insinuated that Anderson Cooper is more of a racist than he is (photo CNN)

“Did you ever like a girl, were you ever jealous of her a little bit if she was with other guys? It’s not that I didn’t want her to be photographed.

“I admit, I was jealous,” said Donald Sterling apparently unaware that Anderson Cooper is gay.

Donald Sterling then said that Anderson Cooper is the racist, not him.

“I think you have more of a plantation mentality than I do. And I think you’re more of a racist than I am. Because I’m not a racist, and I’ve never been a racist,” he said.

Donald Sterling then went on to bash Magic Johnson and successful black people. In his opinion, Jews help their people when they make it. Black people do not.

“What has Magic Johnson done? He’s got AIDS. Did he do any business? Did he help anybody in south L.A.? I think he should be ashamed of himself. What does he do for the black people? I’m telling you he does nothing. It’s all talk.

“I spent millions on giving away and helping minorities. Does he do that? That’s one problem I have. Jews, when they get successful, they will help their people.

Anderson Cooper corrected Donald Sterling and let him know Magic Johnson does not have full-blown AIDS, but instead HIV, and also told him a few things Johnson has done for the community and as a businessman.

The interview came to an end with Donald Sterling explaining how V. Stiviano broke his heart.

“This girl, 100 other men could look at her and they wouldn’t even think she was pretty. But she was something special. And the point I’m making is she was a woman who really never asked for anything.

“It’s like a woman stabbing you in the chest or shooting you. And sometimes women say, <<I love him>> and kill him.”