The EU is imposing further sanctions over Russia’s actions in Ukraine after self-rule referendums in Donetsk and Luhansk.

Separatists in Donetsk and Luhansk regions say 89% and 96% respectively voted in favor of “self-rule”.

Earlier the head of the rebel Donetsk election commission, Roman Lyagin, said joining Russia “would probably be an appropriate step”. 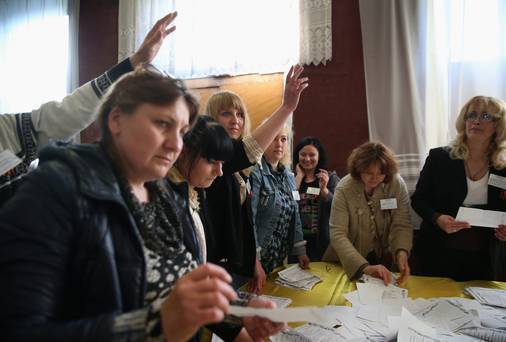 Two Crimean companies and 13 individuals have been added to the sanctions list – the names are likely to be announced officially within the next 24 hours.

The sanctions impose travel bans and asset freezes. EU ministers are also discussing what might trigger a broader package of sanctions against the Russian economy.

The Kremlin denounced what it claimed had been “attempts to disrupt the votes, with the use of force, including the use of heavy weapons, against civilians”.

Later Russia’s Foreign Minister, Sergei Lavrov, said there were no plans to hold fresh international talks on the crisis – he accused the West of an “information blockade” over events in Ukraine and of “shameless lies”.

German Foreign Minister Frank-Walter Steinmeier is to travel to Kiev on Tuesday to promote “dialogue” between the different parties.