India is voting on the final day of the general election, with crowds turning out in the sacred city of Varanasi, a key battleground.

Opposition BJP leader Narendra Modi is being challenged in the seat by anti-corruption campaigner Arvind Kejriwal. 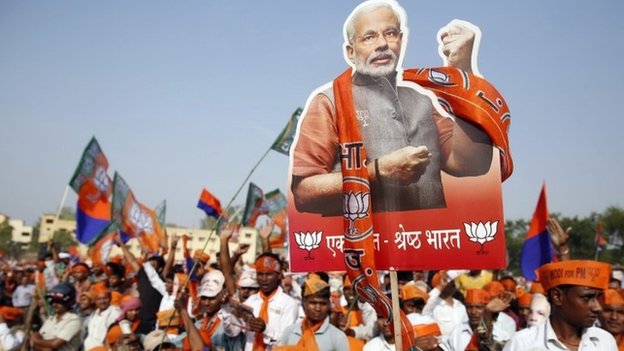 Votes are also being cast in 40 other seats in Uttar Pradesh, Bihar and West Bengal states. The first exit polls are expected on Monday evening.

Narendra Modi is ahead in all the opinion polls. Votes will be counted on May 16.

India’s marathon election began on April 7 and has been held in nine phases for security and logistical reasons.

With 814 million eligible voters, it is the world’s biggest exercise in democracy and the governing Congress party is battling the opposition Bharatiya Janata Party (BJP) for power.

Varanasi has been the scene of frenzied political campaigning not seen in the ancient city in decades. The city been turned into a virtual fortress with thousands of police and paramilitaries deployed to ensure peaceful polling.

Narendra Modi is being given a spirited fight by Arvind Kejriwal of the Aam Aadmi Party, whose army of volunteers is engaged in extensive door-to-door campaigning.

There are a total of 42 candidates in the fray in the seat, including the Congress party’s Ajay Rai, a local political leader.

Correspondents say that this appears to be the most prestigious and high profile battle in the elections – top leaders from the BJP, Congress and AAP have all campaigned here for their candidates in the past weeks.

“This is a very politically conscious city. The epic battle between Mr. Modi and Mr. Kejriwal has pulled the city out of political oblivion,” says Dr. Vishwanath Pandey, who teaches at the Benares Hindu University.

The state of Uttar Pradesh, where Varanasi is located, returns more lawmakers than any other and is often described as India’s battleground state.

Varanasi, on the banks of the Ganges River, has long been neglected despite its religious significance and its infrastructure is badly in need of repair.