Armed police patrol vehicles have been deployed in Beijing following three attacks at transport hubs around the country.

Petrol purchases would also be tightened, with buyers required to register with police, reports said. 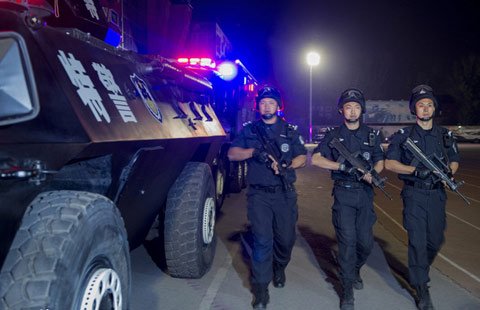 The move follows station attacks in Kunming, Urumqi and Guangzhou, and comes before the Tiananmen anniversary.

Xinhua agency said the armed police patrols would be stationed at major road junctions and manned by at least nine police officers and other assistants.

They would cover an area of 1.8 miles and would be required to respond within three minutes, Xinhua added.

Meanwhile, those buying petrol would have to explain their intentions in a move that aimed to prevent the use of gasoline “to create disturbances”, People’s Daily newspaper said.

The security upgrade comes amid heightened concern over security after the three station attacks.

Chinese authorities have blamed both attacks on separatists from the Muslim Uighur minority group, which lives in Xinjiang.

It is not yet clear what sparked an attack last week at Guangzhou station in which six people were hurt. One man is reported to be in custody.

In October 2013, meanwhile, five people died and dozens were injured after a car drove into a crowd near Tiananmen Square and burst into flames.

Officials said three of those who died – the occupants of the car – came from the Uighur minority group.

The Uighurs, who are ethnically Turkic Muslims, say that large-scale Han Chinese immigration into Xinjiang has eroded their traditional culture and accuse Beijing of oppressive control.

The boost in security in Beijing also comes three weeks ahead of the 25th anniversary of the crackdown on anti-government protesters at Tiananmen Square.

Several well-known activists, including journalist Gao Yu, have been detained ahead of the anniversary.