Deka Arm – a robot arm capable of picking up delicate objects – has been approved for use by US medical authorities.

The Deka Arm has fingers that can move much like real ones making it easier for amputees to feed themselves, zip up clothes and unlock doors.

The robot arm has a much greater range of movement than existing devices many of which are based around metal hooks or designs more than 100 years old.

US Army veterans helped to test and refine the prosthetic limb. 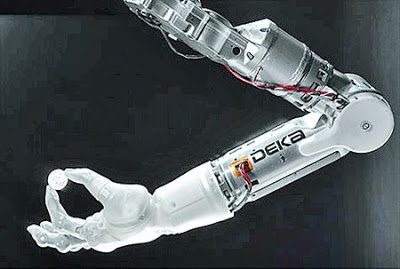 The Deka Arm has fingers that can move much like real ones making it easier for amputees to feed themselves, zip up clothes and unlock doors (photo DARPA)

The Arm was developed with $40 million of research cash provided by the US Defense Advanced Research Projects Agency (DARPA). That money was part of a larger $100 million Revolutionizing Prosthetics research project run by DARPA that aimed to radically improve the range of robot limbs available to those who have lost upper limbs.

While prosthetics have improved in recent years, much of the development work has been done on legs rather than replacements for lost arms and hands. This is because of the formidable engineering challenges of reproducing the coordinated movement of human hands and fingers.

Currently, officially approved designs for replacement arms are often based around split metal hooks – a design first drawn up in 1912.

By contrast, the Deka Arm has been designed to resemble real limbs as much as possible.

The device uses electrodes which detect tiny muscle twitches wearers make as they learn to control the 10 different movements the prosthetic arm can carry out.

“This prosthetic limb system can pick up objects as delicate as a grape, as well being able to handle very rugged tools like a hand drill,” said Justin Sanchez.

The US Federal Drug Administration, which oversees the prosthetic approval process, said the Deka Arm is designed for those who lost their arm at the shoulder, mid-upper arm or mid-lower arm.

The Deka Research firm behind the Arm was founded by renowned engineer Dean Kamen who invented the Segway scooter and many other devices.