Pro-Russian militants in eastern Ukraine are holding “self-rule” referendums – a move condemned by the Ukrainian government and the West.

Self-proclaimed leaders in the Donetsk and Luhansk regions are going ahead with the vote despite Russian President Vladimir Putin’s call to postpone it. 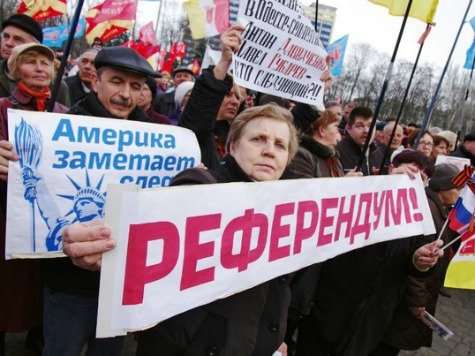 Ukraine says the vote could result in the “self-destruction” of the regions.

Pro-Russian gunmen occupying offices in a number of towns have been involved in heavy clashes with Ukrainian troops.

Reports say there was a fierce fighting overnight on the outskirts of the rebel-held city of Sloviansk, which remains sealed by government troops conducting what the government in Kiev describes as an “anti-terror” operation.

At least seven people were killed in clashes in the port of Mariupol on Friday, officials said.

Referendum organizers said earlier this week that most of the polling stations were controlled by pro-Russian activists and would be ready for voting.

Millions of ballot papers have been prepared.

The organizers have suggested they intend to hold a second round of voting later this month, on joining Russia. They also say they will boycott Ukraine’s presidential elections on May 25.

There are no independent or international observers involved in Sunday’s vote.

On Saturday, Ukraine’s interim President Oleksandr Turchynov admitted many in eastern Ukraine supported the pro-Russian militants, but warned that the referendums were “a step towards the abyss”.

The EU and US have also condemned the referendums, amid fears that Ukraine could be sliding to civil war.

A survey by the Pew Research Centre suggested a majority even in eastern Ukraine – 70% – wanted to remain in a united country, despite concerns about governance.

President Vladimir Putin earlier called for a postponement of the vote to create the conditions necessary for dialogue.