At least 39 people, including 29 police officers, have been hurt and dozens of vehicles damaged in a protest against a planned waste incinerator in Hangzhou city, Chinese state media report.

The violence broke out on Saturday in Yuhang district of Hangzhou city, in the eastern province of Zhejiang.

Local authorities say the project will not go ahead without public support. 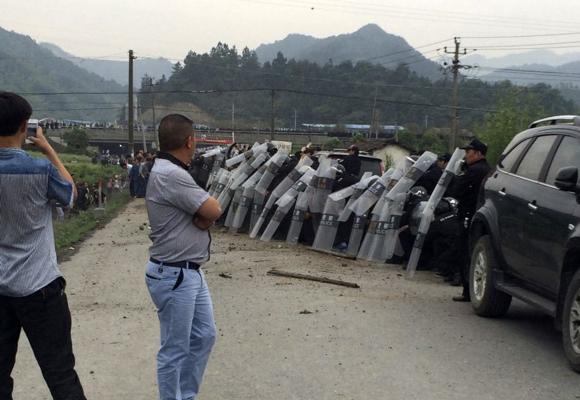 At least 39 people, including 29 police officers, have been hurt and dozens of vehicles damaged in a protest against a planned waste incinerator in Hangzhou city (photo Reuters)

Tens of thousands of protests are held in China every year, mostly against pollution, corruption and land grabs.

Last month, state media reported that 18 people were detained after massive demonstrations against plans for a chemical plant in Maoming, in the southern province of Guangdong.

China’s citizens are increasingly conscious of the health impact of environmental pollution, with many large cities smothered in smog – a by-product of the country’s rapid industrialization and economic growth.

The state-run Xinhua news agency reports that the site for the planned waste incinerator in Yuhang was made public in April.

At the protests on Saturday, two police cars were set alight and dozens of vehicles overturned.

At least two people – a policeman and a protester – were reported to have been seriously injured.

A statement on the local government’s website, published late on Saturday, said that there would be no further work on the incinerator until the public had been consulted over the scheme.

Similar protests in other parts of China have prompted the authorities to change their plans.